The probability of suffering a shark attack in California has declined by more than 91% since the 1950s, according to new research that could help guide attack prevention efforts.

In 2013, a shark attack occurred for every 738 million beach visits by swimmers in California, according to the study to be published in the journal Frontiers in Ecology and the Environment. Surfers had a much higher chance—one in 17 million—of being attacked. A total of 86 attacks caused injury in California between 1950 and 2013, and only 13 of those were fatal.

The absolute number of shark attacks rose over time, but a dramatic increase in human visits to the beach offset the number of attacks. About 7,000 surfers visited California beaches in 1950, for instance. By 2013, that figure ballooned to more than 872,000. The number of beachgoers also rose; it tripled from the 1950s to about 165 million in 2013.

Read More: This Graphic Shows Where Sharks Attack Most in the U.S.

“A shark attack here is really a low probability event—you really have more of a chance to win the lottery than being bitten by a shark,” said study author Francesco Ferretti, a marine ecologist and researcher at Stanford University. “But, nonetheless, when these events happen they can result in tragedies.”

Ferretti attributed the decline in shark attacks, at least in part, to conservation of traditional prey like sea lions and seals. Sharks have drifted less into human territory along beaches as they focused on hunting prey elsewhere, he said.

The research follows a spate of highly publicized shark attacks that have struck fear into U.S. beachgoers, especially those in North Carolina. Researchers say it’s important not to allow events like these to lead to snap judgments about how to deal with sharks. In some places like Western Australia, policymakers have responded to attacks with calls for shark culls, or mass killings of the marine animal. Research hasn’t shown the killing to reduce shark attacks, Ferretti says. Furthermore, sharks play an important role atop the food chain in the marine ecosystem.

And, though the study notes that a beachgoer is about 1,800 times more likely to die of drowning than a shark attack, Ferretti says there are still basic safety precautions they should follow. Hanging out on the beach is safer in the spring than in the fall, he says, and it’s important to avoid hot spots where sharks are feeding, especially if you’re wearing a wetsuit (which makes you look like a seal.)

“I wouldn’t suggest for a surfer to go surfing near an elephant seal colony because the sharks are around there and they’re hunting,” said Ferretti. “We dress like seals and we go in the ocean. It’s no wonder this big animal can make mistakes.” 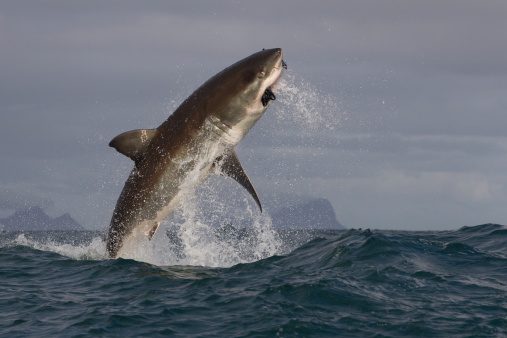 Watch a Shark Photobomb Another Shark
Next Up: Editor's Pick