From smartphones to action cameras, all manner of devices pack GPS these days. And while you might think it’s a newer innovation, GPS has actually been around since the 1970s, when it was developed by the U.S. Department of Defense. Between then and now, relatively little has changed with how the Global Positioning System works. So it’s probably time you figured out what makes it tick — because while you may be on the move, GPS isn’t going anywhere.

According to Cesar Palacios, who works with GPS device company Garmin on its personal navigation devices and automotive GPS units, there are three fundamental segments to GPS: control stations, satellites, and users’ devices. “[GPS] benefits everyone from pilots to fishermen, making their lives a little bit easier,” he says.

The control segment consists of 30 locations around the world that track, control and communicate with GPS satellites. The master control station, located at Schriever Air Force Base in Colorado Springs, is where the system is managed, making sure the satellites are operating correctly and efficiently.

The next segment of the system, orbiting 12,550 miles above Earth, are 32 GPS satellites. Between maintenance and other concerns, those satellites may not all be active at the same time. But they broadcast a lot of information: Almanac data, which relates the health and general whereabouts of all GPS satellites, ephemeris data, which offers more precise information about a single satellite, and pseudorandom code, which identifies the transmitting satellite.

And timing is an important thing when it comes to these far-flung pieces of technology. Per Einstein’s theory of relativity, time moves more slowly in areas where gravitational pull is greater, so the clocks on GPS satellites actually tick a fraction of a second faster than clocks on Earth. GPS satellite and receiver companies counteract this effect by programming their devices to compensate for it.

The third segment of the system are the consumer devices themselves — your smartphone, your car’s onboard computer, or even your fitness tracker. To have your position located using one of these gadgets, your GPS device must be able to get a signal from at least three of the system’s satellites. Using a process called trilateration, these orbiting bodies are able to tell where you are. For most consumer devices, the results are accurate to within 10 meters.

“The reason why you can’t get that pinpoint, exact accuracy is that we’re consumer-grade,” says Palacios. “The government agencies are the only ones who have that pinpoint, precise, encrypted code GPS, to know the exact location.”

Still, there is a way to get more information out of your GPS, says Palacios. “If you have four or more satellites, that’s when you’ll get 3-D positioning, which is latitude, longitude and altitude, as well.” Assuming, of course, your device can display this extra data.

Of course, GPS only works outdoors with line-of-sight with the orbiting satellites. But there are several emerging technologies used by companies like Apple, Home Depot, and Philips to cover the indoors in a GPS-like system. In the future, expect GPS devices to proliferate as it miniaturizes. As the tech gets smaller, you’ll start finding them in things like smartwatches, fitness bands and even dog collars.

“Even if you’re in a stadium or trying to remember where you parked, with wearables, you can just drop a digital breadcrumb and be able to go back to that location later,” says Palacios.

Correction: The original version of this article misstated the definitions of ephemeris and almanac data. Ephemeris data is precise data from one specific satellite, almanac data is less precise information about the entire GPS satellite fleet. 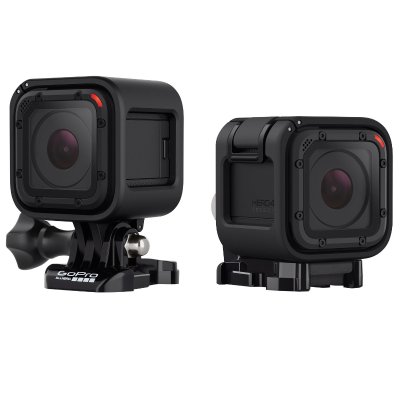 6 Action Cameras For Capturing Your Summer Fun
Next Up: Editor's Pick