Pacquiao posted a photo on Instagram of him and his wife Jinkee holding hands and praying with Veloso. “Praying with Mary Jane Veloso. Please keep her in your prayers,” he wrote.

Veloso, who won a last-minute temporary reprieve from execution April 29, following a social-media campaign and a personal plea from Pacquiao, was reportedly in tears during the visit.

Veloso was sentenced to death for drug smugging in October 2010, but her family and supporters say the single mother of two was an unwitting victim of human traffickers. Amid a massive social-media campaign launched by migrant-workers’-rights and women’s-rights activists in both countries, Pacquiao made a televised appeal to Indonesian President Joko Widodo to spare the life of Veloso on April 27, two days before the scheduled execution.

Hours after Veloso’s temporary reprieve, the boxing icon promised he would visit her after his “fight of century” against Floyd Mayweather on May 2 in Las Vegas — a promise he has now fulfilled.

Pacquiao and his wife flew to Indonesia on Tuesday to shoot a commercial for a local herbal-medicine company. He and his entourage stayed at Wirogunan prison for about 30 to 60 minutes. Indonesian migrant activists gave him and his wife a handmade batik gift to express their gratitude. “This visit is very important and can give moral support to MJ [Mary Jane],” said the Indonesian Migrant Workers’ Network in a statement. 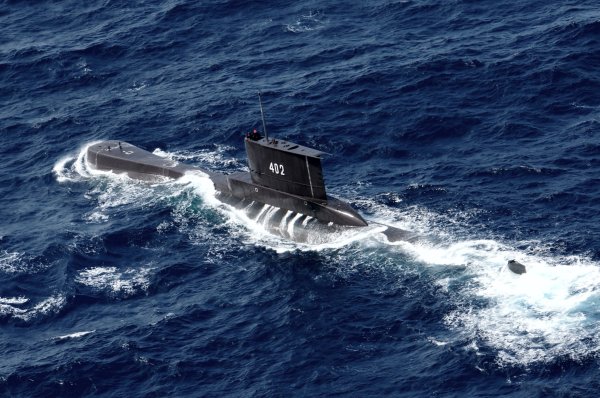 Indonesia Searches for a Submarine With 53 People Aboard
Next Up: Editor's Pick