Germany's Tony Martin, wearing the overall leader's yellow jersey, lies on the road with a broken collar bone after crashing in the last kilometers of the sixth stage of the Tour de France cycling race over 191.5 kilometers (119 miles) with start in Abbeville and finish in Le Havre, France, July 9, 2015
Stephane Mantey—AP
By Alissa Greenberg

Tour de France leader Tony Martin has been forced to drop out of the race after a serious crash on July 9 left him with a shattered collarbone.

The crash, which took place during the last kilometer of stage six between Abbeville and Le Havre, involved several other riders, but none were as seriously injured. Martin, however, was left with a collarbone in “lots of pieces,” team doctor Helge Riepenhof told the BBC.

“One of the pieces came through the skin, which means it’s an open fracture. Therefore, even if it was Tony’s wish to start tomorrow, I have to say he is not allowed to,” he said. Despite his injuries, Martin was still able to pick himself up and crossed the stage six finish line with help from his teammates.

Martin will be flown to BG Hospital in Hamburg for surgery, moving Britain’s Chris Froome, who was 12 seconds behind Martin, into the overall lead. This is not the first time this year that a leader has had to exit the race: Swiss cyclist Fabian Cancellara pulled out on July 6 after he fractured two vertebrae in an crash just as dramatic as Martin’s. 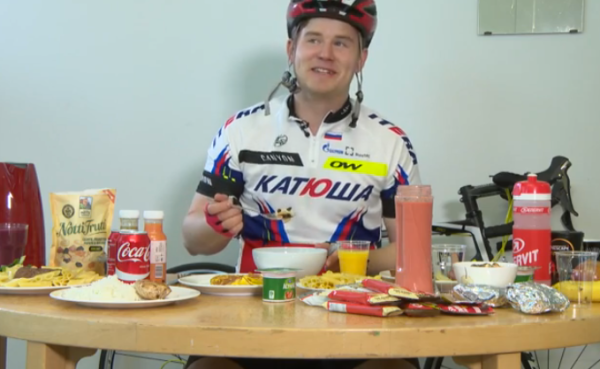 Watch This Man Try to Eat Like a Tour de France Cyclist
Next Up: Editor's Pick