Here's How to Battle Your Smartphone Addiction

Can you see a smartphone right now? Is it yours or someone else’s? Where is your smartphone? In your bag? In your hand? You probably lost it!

If reading that paragraph just made you a little anxious, then congratulations, you are a human alive today. And if reading those questions made you palpitate and sweat like a perp in a lineup, then don’t worry, you’re not alone. And you’re probably not very old, either.

In a series of polls related to smartphone use released last week, Gallup found that about half of smartphone users check their phones several times an hour or more frequently; 81% of people said they keep their phones near them “almost all the time during waking hours” and 63% do so even when they’re sleeping. The condition is especially severe among the young, one-in-five of whom cop to “checking their phone every few minutes.”

Meanwhile, a May poll from Common Sense Media found that 50% of teens say they’re “addicted to their smartphones. (It should be noted that a teenager saying they’re “addicted” to something does not necessarily mean they are addicted in the medical sense.) Nearly three-quarters of teens “feel the need to immediately respond to texts, social-networking messages, and other notifications,” per Common Sense’s survey.

That might elicit a “tsk, tsk” from family members appalled by such behavior — Common Sense says 66% of parents think their children spend too much time on their phones. But all this checking doesn’t just come at the cost of neglecting the world around us. Researchers have been building a body of disheartening-but-fascinating research about the mess of mutual dependence that is our relationship with our smartphones. They’ve connected it to anxiety and stress and our increasing state of distraction.

There is, however, a way we might break the cycle of addiction, even if we all have to go through our own withdrawal montage.

But first, the disturbing news. In a 2015 study conducted at the University of Missouri, media researcher Russell Clayton found evidence that some people feel their phones are part of them—kind of like a leg or an arm. In a clever ruse involving word search puzzles and a blatant lie about signal interference, Clayton was able to get a snapshot of about 40 college students’ physiological states when their iPhones started ringing across the room but they were unable to answer them.

“Their blood pressure and heart rate increased. Their self-report of anxiety and unpleasantness also increased,” says Clayton, now an assistant professor at Florida State University. The students also became worse at doing word search puzzles, suggesting poorer cognitive performance. Yet his eeriest finding — beyond evidence that future generations will probably go straight into anaphylactic shock when separated from their devices — was that people reported a physical lessening of themselves when they did not have their phones.

“They reported feeling a loss of identity,” he says. “When objects become possessions, when we use them a lot, they’re potentially capable of becoming an extension of ourselves.” When digital natives born today grow up to be toddlers who are crying because a parent takes their iPad away, Clayton says that could leave us with interesting questions: “Are they upset because they can’t play their game? Or are upset because they don’t have the iPad, the object, the possession?”

Perhaps the person who has done the most work in this field is Larry Rosen, a psychology professor at California State University. Rosen is in the middle of writing a book on our technology-addled brains. In his research, he’s found that if there’s a phone around—even if it’s someone else’s phone—its presence tends to make people anxious and perform more poorly on tasks. These effects, he’s found, become more acute among heavy users, those people checking their email and social media every 15 minutes or walking around with their hand tucked snugly around their phone. In a 2014 study, he separated college students from their phones. “The heavy users, 10 minutes in they’re already anxious and their anxiety kept going up and up,” he says. “And who are the heavy users? They’re the young people.”

Technology tends to “overact” our brains, draining us of unfettered, daydreaming-type creativity, he says. Today’s average college student, a member of the first generation to really grow up digitally native, now focuses and attends to one thing for about three to five minutes before feeling the need to switch their attention to something else, he says: “It makes us very tired. It makes us very miserable. It overloads our brains. … It is not good for us.” In his work, Rosen has referred to these gadgets by using an acronym for Wireless Mobile Devices — or WMDs, for short.

It might seem like going cold turkey is the best approach, but Rosen says that taking kids’ phones away or other forms of digital detox—like going away for a week to a place with no signal—aren’t sustainable solutions. “The real world comes back and crashes in,” he says of kids whose parents separate them from their devices. “And then they realize they have 400 emails, they have 30 text messages and they’ve got 100 posts from Facebook friends that they have to go back and like and comment on. So taking the phone away or restricting them is only going to create more anxiety and not really solve the problem.”

The good news is that Rosen does have a plan: weaning off devices bit by bit and making a public statement that you’re going to do so. This second part is key. Only if you’ve warned your parents and friends that they shouldn’t take it personally when you don’t text them back or like their picture right away, he says, will you be able to actually relax, no longer in fear of offending anyone who expects you to be on all the time. Meanwhile, you must wage an internal battle against your own FOMO.

“You announce to the world that you’re only going to check your phone once a half hour,” he says, “and then you allow yourself a minute or two every half hour to check in, return a call, text back, and then turn it off and put it away.” Then perhaps get bold and go up to an hour. Then perhaps two hours, in an attempt to eventually make the phone less like the limb it has become and more like the really cool toaster it could be. 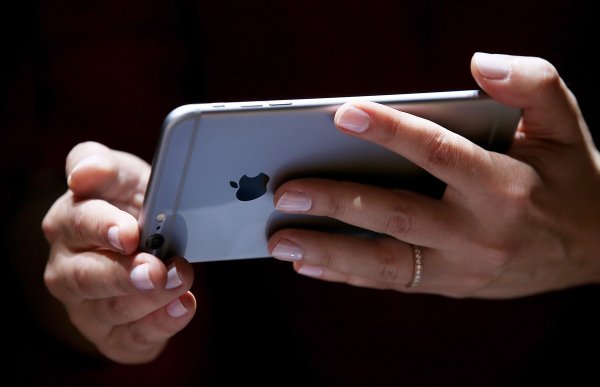 Here’s How Many Americans Sleep With Their Smartphones
Next Up: Editor's Pick