The U.S.A. Women's National Team celebrates with the trophy after they beat Japan 5-2 in the final match of the 2015 FIFA Women's World Cup at the BC Place Stadium in Vancouver on July 5, 2015.
Elaine Thompson—AP
By Maya Rhodan

An anti-sexism group is planning to protest wage inequality at a parade to celebrate the USA team’s win at the 2015 Women’s World Cup in New York City on Friday, with a plane carrying a banner calling for equal pay in soccer.

The banner will read “@UltraViolet: FIFA—Equal Pay 4 Equal Play” and is scheduled to be displayed above the New York celebration from 9a.m. until 12p.m. on Friday. The group is also dispatching a fleet of bikes with equal pay billboards throughout the city all day.

The group has been calling on FIFA to hike pay for women since February, but has increased pressure in light of the USA team’s World Cup win. The women’s team received $2 million for their World Cup win, significantly less than the $8 million the men’s team got after losing in the first round. 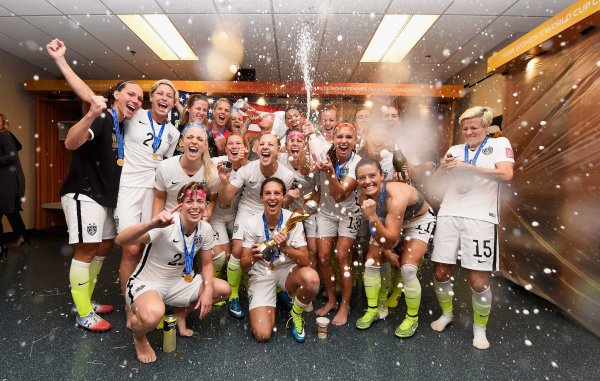 U.S. Women's Soccer Team Is Getting a Ticker-Tape Parade
Next Up: Editor's Pick