Among Republicans, it’s known as the Eleventh Commandment: Thou shalt not speak ill of fellow Republicans.

Donald Trump has broken that commandment, repeatedly. In fact, he’s even spoken ill of President Reagan, who coined the maxim.

That’s not to say he doesn’t insult Democrats. But his predilection for name-calling fellow Republicans could prove to be more troublesome in the near-term as he campaigns for the GOP presidential nomination.

Here’s a look at some of the Republicans Trump has maligned.

In 2007, he told CNN Bush was “probably the worst president in the history of the United States” — an epithet he now reserves for President Obama. More recently, he criticized Bush for charging a veterans group a speaking fee.

In January, he said in a speech at the Iowa Freedom Summit that the Republican Party shouldn’t nominate Bush for president in 2016. “You can’t have Bush. The last thing we need is another Bush,” he said.

In January, he said in a speech at the Iowa Freedom Summit that Mitt Romney shouldn’t run again because “he choked” in 2012. “It can’t be Mitt, because Mitt ran and failed,” he said. In July, he told the Washington Post that Romney was “a frozen jellyfish” in the presidential debates.

On Friday, after The New Yorker published an interview in which Sen. John McCain said that Trump was supported by the “crazies” in his home state, Trump slammed the former Republican presidential nominee on Twitter.

In June, he told Bloomberg Politics that Walker, who will kick off his campaign Monday, wouldn’t be a good presidential nominee because he’s having financial problems running his state.

“He’s got a lot of problems in Wisconsin. You know, Wisconsin’s got tremendous problems … the debt and the difficult problems that they have going on Wisconsin. Tremendous borrowings,” he said.

In May, he criticized Kasich, who will announce his run for the GOP nomination on July 21.

After Perry told ABC News this month that he was offended by Trump’s remarks about Mexican-Americans at his campaign launch, Trump blasted him on Twitter:

In June, he told Breitbart News that Rubio, another rival for the GOP nomination, is wrong on immigration reform.

In May, he told the Des Moines Register that Fiorina was “viciously fired” from the tech giant then “lost in a landslide” in her race for a California Senate seat.

“She lost much of her money on that run — that’s why she carries her own bags now,” he said.

In 2011, he tweeted that former Huntsman gave “the worst responses on China” in the GOP presidential debates, saying sardonically that he could understand why Obama appointed ambassador to China.

In 2012, he told CNN that he didn’t see why Santorum could run for president after losing his reelection campaign. “To my knowledge — the most in the history of this country for a sitting senator to lose by 19 points. It’s unheard of. Then he goes out and says, ‘Oh, okay, I just lost by the biggest margin in history, now I’m going to run for President.’ Tell me, how does that work? How does that work?” he said.

In 2011, he criticized Cheney in an online video. “I didn’t like Cheney when he was a vice president; I don’t like him now,” adding that Cheney did a “rotten job” and that “nobody liked him.”

In his 1987 book The Art of the Deal he wrote that Reagan was “so smooth” that he won over the American people. “Only now, nearly seven years later, are people beginning to question whether there’s anything beneath that smile.” 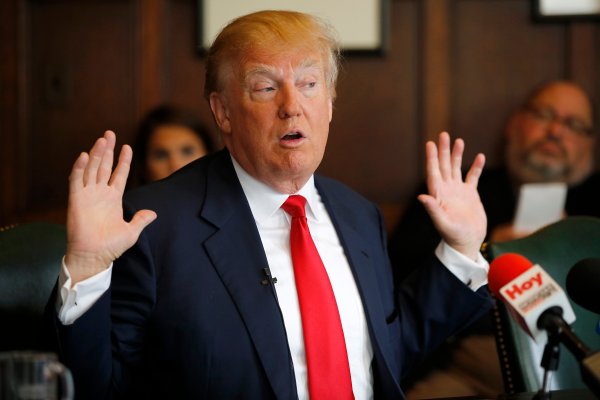