What Ariana Grande's Donut Scandal Shows Us About Modern Celebrity

Since she came onto the music scene with her first album, 2013’s Yours Truly, Ariana Grande has been among the most carefully packaged stars in the industry. Grande’s outfits and styling are at times provocative but never truly racy; her music is so all-over-the-map as to avoid betraying anything so risky as a personality. That’s why her presence in the news this week, after getting caught on tape licking unpurchased food at a donut shop and saying, “I hate America,” is so surprising. This unsavory side to Grande’s personality is so unfortunate because Grande hasn’t shown us too much else about herself.

Past eras didn’t have as many opportunities for stars to embarrass themselves as Grande has; security-camera footage shared around the world on a no-holds-barred website is an invention of the past decade or so. As stars have grown more vulnerable to embarrassment, though, the access to whatever is their real self has grown more and more limited. Social-media accounts run or vetted by stars’ teams have replaced the magazine interview in which a celebrity might say something embarrassing offhand, for instance. And provocation on stars’ parts tends to take place within tightly controlled spaces that directly benefit them, like “scandalous” awards-show performances that get news coverage without pushing the envelope too far.

It’s tough to think of a framework in which Grande’s uncouth, frankly gross behavior caught on tape would be acceptable; her licking donuts offered for sale to other people has occasioned a police investigation and may seriously damage a small business’s prospects. But her remark about America might be a little less jarring placed into context—not just of her evening, but of whatever is her personality. Grande, in spite of occasional oddball moments and fierce loyalty to her provocative brother Frankie, is a member of a class of stars who are more protected than ever before. (Her most recent album, My Everything, lived up to its name by touching briefly on just about every aspect of modern music that’s popular, so as to leave nothing out even at the cost of a coherent idea of Grande.) If Grande has a savage, nihilistic sense of humor, the sort that leads to a too-sharp but not really offensive joke about Americans’ appetites, it hasn’t had the chance to shine through in a career that’s so far seemed predicated on offending no one. Grande does make waves sometimes, as when she responded to Bette Midler’s criticisms by citing Midler’s feminism or said she believes in demons, but those moments are fleeting, unconnected to Grande’s work, and in service of an idea of the star as good-hearted, likable goofball. If they weren’t passed through several levels of management, they feel as though they could have been.

Young people—particularly those who’ve been on television, as Grande was, since they were very young people—will always act out. Grande’s actions only come as a surprise when placed in counterpoint to her robotically good mien, one whose inhumanness has made her, so far, a perfect celebrity. The efforts to reel her back in have been unusually transparent, as with a lengthy statement, shared via Twitter, in which Grande said that “[a]s an advocate for healthy eating,” she’d been inspired to say she hates America because “I sometimes get upset by how freely we as Americans eat and consume things without giving any thought to the consequences that it has on our health and society as a whole.”

Common sense dictates that an advocate for healthy eating would avoid a donut shop, rather than go there for the express purpose of mocking it and its clientele. But this explanation is more about providing Grande a path back to not having to speak in public than it is about making sense. Spinning a careless moment of loose talk into a moment to share one’s wisdom with the less fortunate: The celebrity-industrial complex has switched into high gear, and Grande’s reputation as a celebrity will be fine. She’s too good at what’s required of her—representing nothing—to end up a symbol of bad behavior. 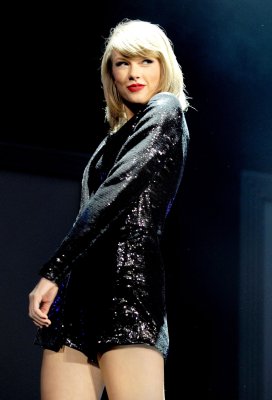 Taylor Swift Loves This Acoustic Version of 'Bad Blood'
Next Up: Editor's Pick