It’s here again. The quarterly financial reality show that Wall Street calls earnings season. And for technology companies, it seems like an especially precarious time to talk to investors about their financial health.

The last earnings season in April was a dicey one for all but a few tech companies. If anything, the overall environment has grown even more uncertain, if not gloomier. And if there is anything that tech giants learned during the April earnings season, it was that storms in the global economy beyond their control are beginning to have a very real—often deleterious—effect on their bottom lines.

Are things as grim as they look? The expectations say so, but these expectations have been weeks in the brewing. Here are five clouds that are sure to hang over the summer season for technology earnings, along with one silver lining that could redeem of the concerns.

Greece is the word. Corporate executives love a scapegoat. Especially during earnings season. And even more so when they know that their reported earnings are likely to disappoint. This summer, there is no scapegoat more primed for sacrifice than Greece. Expect to hear how an imminent default will curtail revenue and profit growth, even and particularly among companies that have little if any business in Greece.

In some cases, this may not be as lame as it sounds. The concern about Greece all along has been what a default and subsequent exit from the Eurozone would mean for larger economies such as Italy and Spain. Beyond that, will growth slow in Europe’s broader economy, a key market for many multinational tech firms? And more immediately, will the US dollar remain strong? Recall that a strong dollar dented the revenue growth of many US tech companies last quarter, notably Facebook.

Tech companies can hedge against currency fluctuations, but this works better when things aren’t as volatile as they are right now. The dollar has remained strong against the Euro and other currencies between April and July. If anything, the recent turmoil in Europe has added to dollar strength that few companies had been expecting.

And the next few months could be just as uncertain, if not as tumultuous – which could lead many tech companies to be cautious when they offer guidance for earnings and the rest of the year. If so, expect a lot of conservative earnings estimates coming from companies as they hedge their forecasts into year that is becoming even cloudier and more unpredictable as it progresses.

A China meltdown. In a global economy where being successful increasingly means being multinational, the exposure to bonfires that are burning 6,000 miles away from Silicon Valley can deliver some blowback onto US companies. The crisis in Europe and the result is one example. Another, perhaps bigger threat emerged in June in a much larger market: China.

Over the past year, a stock bubble has been building on exchanges inside the Chinese mainland. Chinese markets rebounded nearly 7% Thursday after losing more than 30% of their value in the previous month. But what if this is just the proverbial dead-cat bounce? The concern for US tech companies has been what the fallout of the bursting of the Chinese stock bubble means for consumer spending on things like smartphones and online services.

A prime example is Apple. After being written off as an aging tech company, Apple once again revived its growth on the iPhone 6. Much of that growth came from China, where iPhone sales topped those in the US for the first time ever. But what happens when personal discretionary spending dries up in China? Is the iPhone seen as a necessity, or a luxury? We will find out when Apple – still as close as Silicon Valley has two a bellwether for the entire tech industry – reports earnings on July 21.

The fall and fall of the PC. When the iPad emerged five years ago, it precipitated a decline in PC sales. But a year ago, when iPad sales began to plateau themselves, the sales of PCsbegan to stabilize. That gave some hope to companies like Microsoft, Intel, AMD that they had more time to respond to the death of the PC and come up with alternative revenue streams.

In recent weeks, it’s become clear that PC sales are once again slumping, not just in spite of – but in part because of – the release of Windows 10. AMD warned investors this week tobrace for disappointing revenue. Analysts of Intel’s stock are urging its shareholders lower their expectations. Consumers may have written off the PC a few years ago, but this quarter may show that companies that relied on the laptop and desktop for decades continue to bleed out.

Smartphone sales aren’t what they used to be. Hardware manufacturers looking for growth has been focused on smartphones for the past several years. The feature phone of yore quickly became a relic of the aughts, while the functionality of smartphones quickly replicated when PC or laptop could do (see above).

In 2014, smartphone users grew 25% to 1.6 billion users, according to eMarketer. But sales growth is slowing. This year, smartphone users will grow by 16.8%. And IDC expects an even slower growth rate of 11.3%. As a rule, larger market penetration means slower revenue growth. And smartphone makers are finally hitting the diminishing returns of expanding into the largest market on the planet.

The catch for US investors is, even the growth happening now is going to companies that aren’t traded on US exchanges. Xiaomi, which has garnered a $45 billion valuation in private markets, sold 35 million smartphones in the first half of 2015 and plans to sell even more by expanding from China into India and Brazil.

Now look at the older, publicly traded smartphone makers. Samsung Electronics warned this week that its revenue would fall 8%, well below investor expectations. Microsoft laid off 7,800 jobs, largely because of its ill-considered purchase of Nokia and take a $7.6 billion charge against the 2013 acquisition. BlackBerry disappointed again on the back of poor smartphone sales. More phones around the world may not be translating into accelerating profits for US tech companies.

The valuation conundrum. Say what you will about the dot-com boom. Tech stocks then may have been grossly overvalued, but at least they were uniformly overvalued. Today, things aren’t so simple. The S&P 500 has a forward PE ratio of 16.5, while the tech portion of that index has a slightly lower PE of 15.5.

The silver lining. There is, however, a wildcard inside the earnings season. It’s that, as a rule, much of the bad news has been evident for a while. And because investors have seen it coming for a number of weeks, they’ve had a chance to prepare for the worst. This leaves a significant potential for surprise. So you might look at the bearish mood and think things could get better.

So here’s what tech investors can reasonably look forward to opening several weeks. Like last quarter, if a company shows signs weakness, a selloff will likely ensue. But on the other hand, expectations in general are so low that any sign of surprising strength – even in an overvalued stock like Netflix or Amazon – will likely push share prices higher.

In other words, we’re in a stock-picker’s market. You’re either hero or a goat, and you’re only as good as your last quarter. Overall, given the bearish sentiments that the market has going into this tech earnings season, there seems to be room for positive surprises. But if many tech company earnings come in below expectations, there is also no shortage of scapegoats to go around. 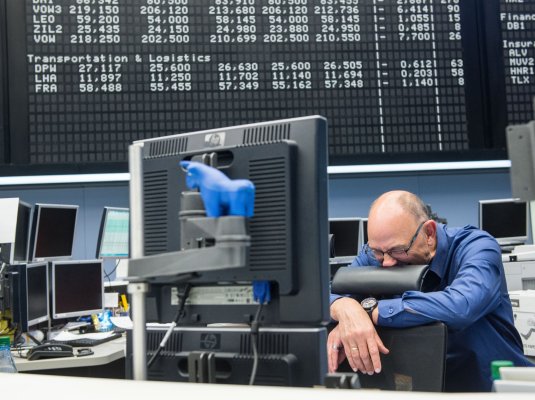 Investors Are Terrified Greece's Economy Is Falling Apart
Next Up: Editor's Pick