Former Florida Gov. Jeb Bush seems to have earned what is now a rite of passage for White House hopefuls: the out-of-context quote that will be replayed thousands of times.

On Wednesday, Bush was speaking to the conservative editorial board of the New Hampshire Union Leader when he seemed to say Americans need to work harder if they want the economy to grow.

“My aspiration for the country—and I believe we can achieve it—is 4 percent growth as far as the eye can see,” he said. “Which means we have to be a lot more productive, workforce participation has to rise from its all-time modern lows. It means that people need to work longer hours and, through their productivity, gain more income for their families. That’s the only way we’re going to get out of this rut that we’re in.”

The comment comes the week after Bush released tax returns that show he made almost $29 million between 2007, when he left the Governor’s office, and 2013. Coming from the son of one President and brother to another, the remark instantly gave Democrats a chance to paint him as an out-of-touch elitist.

In fact, a study released this year from the left-leaning Economic Policy Institute found worker productivity rose 74% between 1973 and 2013, while wages were only up 9%. In other words, Americans were indeed doing more work with scant increase to their compensation. And among the top earners—the 1%—incomes were up 138% since 1980, while the bottom 90% of workers saw wages rise just 15%.

Bush tried to clean up his mess later in the day, telling reporters he was talking about the need for Americans to find full-time work, not part-time jobs. “You can take it out of context all you want, but high-sustained growth means that people work 40 hours rather than 30 hours and that by our success, they have money, disposable income for their families to decide how they want to spend it rather than getting in line and being dependent on government,” Bush told reporters.

Democrats and Republicans alike were skeptical about Bush’s explanation that he was talking about Americans with part-time jobs. “I don’t buy it,” a senior adviser to a Republican rival said. “Give me a break,” another said.

That’s not to say the remark, however politically tinny, would hobble his shot at becoming the third member of his family to claim the presidency. Republican voters in the early nominating states generally feel that the economy is struggling under President Obama. (In fact, the economy has added roughly five times the number of jobs under Obama than under President George W. Bush and the unemployment rate is below the historical averages.) Jeb Bush continues to enjoy success in fundraising and establishment-minded Republicans still count him as one of their favored options.

It’s why Democrats have been unrelenting. “Jeb Bush’s economic plan seems to be demanding middle class Americans work longer, while refusing to do anything to actually help the middle class get ahead,” Democratic National Committee spokeswoman Holly Shulman said Thursday. “Raising the minimum wage? Nope. Ensuring women are paid equally for the long hours they work already? No comment. Repealing quality, affordable health care? Sure. I wonder how much harder Jeb Bush wants Americans to work—47% more?”

Yet Bush’s team instantly recognized the potential problem. Many of them worked through 2012 to amplify a similarly troublesome comment from Obama. During a campaign stop in Virginia three years ago, Obama said government works to provide services like firefighters and infrastructure like roads and the Internet. He then uttered this doozy, a favorite that 2012 GOP nominee Mitt Romney loved to repeat: “If you’ve got a business, you didn’t build that. Somebody else made that happen.”

Romney, however, was no stranger to toxic, off-handed remarks. An unauthorized video of Romney appearing at a fundraising event captured him seeming to disparage Americans who earn so little that they do no pay federal income taxes. Romney said he could not appeal to those voters because they rely on government programs, promoted by Obama. “There are 47% who are with him, who are dependent upon government, who believe that they are victims, who believe the government has a responsibility to care for them, who believe that they are entitled to health care, to food, to housing, to you-name-it. … They will vote for this President no matter what.”

Both comments made their way into the partisan echo-chamber and featured prominently in campaign and super PAC ads. Yet it was Romney’s, coming from a multimillionaire former venture capitalist, that was more damning. Obama won a hard-fought re-election. Romney retired. 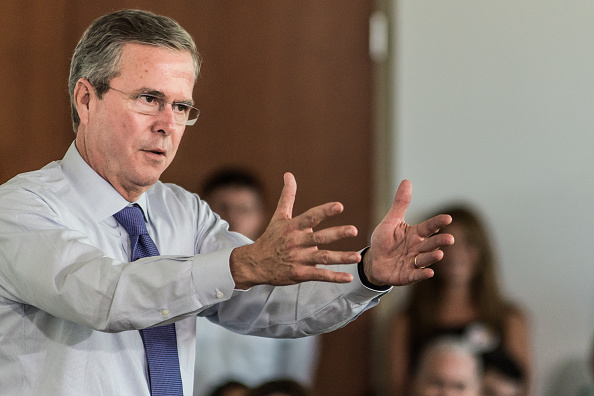 Tax Returns Show Jeb Bush Did Well After Being Governor
Next Up: Editor's Pick