Hollywood may finally be done body shaming Jennifer Lawrence. The Hunger Games star has spoken out about how she was told to lose weight for roles; she often, too, gets attention for talking about her eating habits on the red carpet. But, as the star reflected during a San Diego Comic Con press event, she may finally be famous enough that the industry won’t criticize her anymore.

When a journalist asked Lawrence whether she thought she would continue to get robust roles after the final installment in the Hunger Games series, Mockingjay – Part 2, premiered, the actress said she hoped so. At a panel earlier in the day, her male cast members joked that at 24, Jennifer Lawrence was an old lady by Hollywood standards—calling into question her continued ability to nab action hero roles .

“Um—well that’s risky,” the infamously candid star said, catching herself before she answered the question. “I’m trying this new thing where I have a filter. And right now I’m dancing on, well, this could blow people’s hair back—in a good way—or it could also be my last time at Comic-Con.”

She went on that she thinks that more roles—and more interesting roles—are available to women in Hollywood now than they used to be. “I would hope that there are more opportunities for women,” she said.

She then turned the conversation to body image: “I had a conversation with somebody about the struggles with weight in the industry—I know that’s something I talk nonstop about. And they were saying, ‘All of the main movie stars aren’t very underweight.’ I said, ‘Yeah, because once you get to a certain place, people will hire you. They just want you to be in the movie, so they don’t care.'”

“It’s more about the struggle for actors and actresses who have not made it to a certain place, and there’s a lot of pressure,” she said, admitting that she’s at a point in her career where she doesn’t encounter criticisms of her body as often as she did before she starred in both the Hunger Games and X-Men franchises. 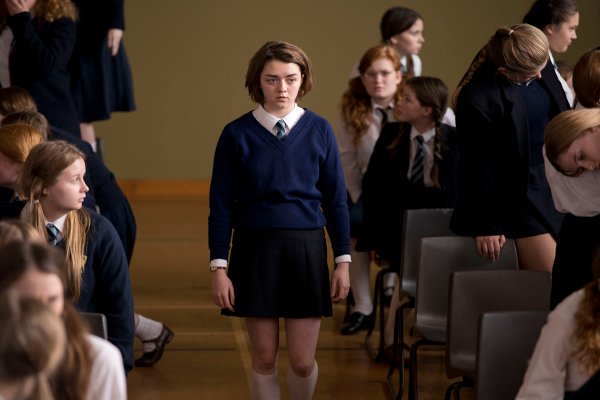 Maisie Williams on How Game of Thrones Treats Women
Next Up: Editor's Pick