Ever wondered what would happen if you, an ordinary mortal, ate like the beautifully honed physical specimen that is a Tour de France Cyclist? Now you don’t have to. Norwegian journalist Nicolay Ramm has recorded a video of his heroic effort to match the 8,000 calories Tour cyclists eat on every day of their punishing 2,100-mile, 23-day ordeal. It goes about as well as you might think.

The diet itself isn’t so unusual — it’s the sheer quantity that does it. Take breakfast, for example. Coffee, oatmeal and eggs all sound like pretty standard fare. But in the first “stage” of his culinary Tour, Ramm also downs orange juice, and a smoothie, three ham and cheese sandwiches, four ounces of pasta, and a yogurt.

For a snack, Ramm eats an apple and banana, a handful of nuts, and two energy bars, plus more coffee. (Tour cyclists, the video says, drink “enormous” amounts of coffee.) Then he adds what cyclists would grab during the ride: two croissants, two cans of Coke, seven energy bars, two energy gels, and a generous sprinkling of sports drink. That’s where the intrepid journalist can take no more. Trying valiantly to finish off the gels, he instead admits defeat, running to the bathroom with lunch and dinner still uneaten.

He consumes 4,300 calories in just over five hours. Not even close. 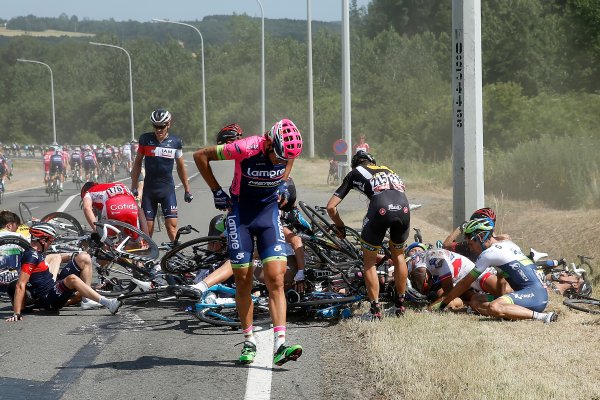