You know what they say: All is fair in love, war, and wartime propaganda. Well, chances are Plutarch Heavensbee has said (or thought) that at some point.

And in a new teaser for The Hunger Games: Mockingjay – Part 2, first posted on Jennifer Lawrence’s Facebook page, Katniss can be seen wearing a red suit and some sort of cape/hood as she stands proudly on a statue of the sign for District 12 (and now, the rebellion). That image, paired with epic music, is then followed by another screen, which reads, “Stand by for a message from District 13.” In other words, Katniss’ superhero pose is intended to rally supporters in the war against the Capitol.

But now the question is: Is Katniss’ red suit only part of a propaganda campaign, or will we see it in action?

And now, the teaser isn’t the only place the red suit has shown up. The film also tweeted out a new poster of the girl on fire sitting on a white throne. See below:

The Hunger Games: Mockingjay – Part 2 will open in theaters on Nov. 20. 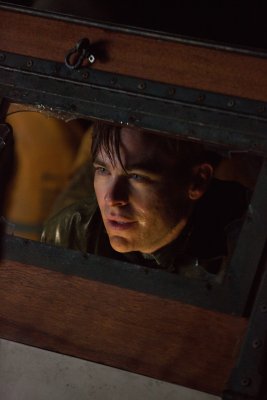 See Chris Pine as a Coast Guard Captain in Trailer for Disney's The Finest Hours
Next Up: Editor's Pick