Trading Halt? Here's What to Really Worry About in the Markets Now

In markets, as in journalism, three’s a trend. So it’s no wonder that everyone is in a panic about the halt of today’s trading on the NYSE, coupled with the free fall in Chinese markets that has come on the heels of the Greek debt crisis. While the first is apparently a technical glitch, and the latter two are big, long-awaited macro events, the fact that they are all coming together isn’t great timing. Global markets were already on a hair-trigger.

Technical “glitches” are never welcome, but this one is coming at a particularly bad time. Markets have been waiting for a major correction for months now. Why? Because we’re now entering the second major global economic shift since the 2008 financial crisis–the end of the era of easy money. Central bankers have pumped trillions into the economic apparatus and kept interest rates low for an unprecedented period. The expectation until quite recently was that the Fed would slowly begin to raise rates in September, with the hopes of very gently deflating a market bubble that might otherwise pop (valuations of stocks are historically high).

MORE: Here’s What It Looks Like When the New York Stock Exchange Goes Down

But that was before the Greek crisis blew up, and threatened the future of the Eurozone and the political integrity of America’s biggest ally. And then there’s the market meltdown in China, which if it continues will make Greece look like a sideshow. China creates a new Greece every six weeks, and represents the biggest chunk of global growth in the last decade. TIME called the China bubble early on, but the fact that the markets have gone into a panicked slide now, as Europe is struggling and the US is about to change the economic paradigm by raising interest rates, isn’t a stellar combination.

(BTW, China’s crash is due to both market speculation—there are 90 million retail investors in China, two-thirds of which don’t have a high school diploma—and the real economy—debt is a whopping 300% of GDP. For all you need to know on that, check out Ruchir Sharma’s oped in today’s Wall Street Journal.)

What’s the upshot? Whatever correction is coming, US stocks are still a decent place to put our money relative to other regions at the moment. But investors have to take the long view and be prepared for a rough ride. Volatility in the first half of this year has already been greater than all of last year. I predict that when trading resumes on the NYSE, there will be jitters. And then people will go back to worrying about all the really important things in the global economy that they were worried about before the exchange halt. 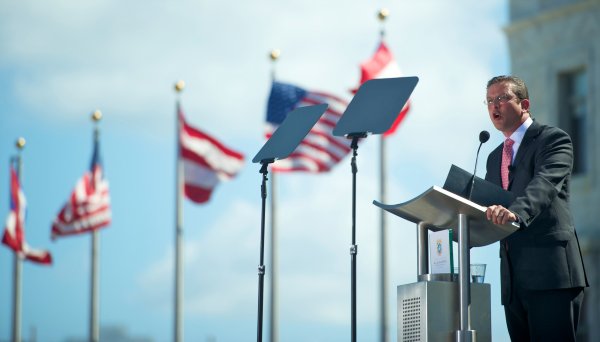 What to Know About Puerto Rico's Economic Crisis
Next Up: Editor's Pick