What It Means When Marriage Is a Contract

A man holds a U.S. and a rainbow flag outside the Supreme Court in Washington after the court legalized gay marriage nationwide.
Jacquelyn Martin — AP
Ideas
By Jane Greenway Carr / New America

Amidst jubilation from some, consternation from others, and against the backdrop of over 26 million rainbow profile pictures on Facebook, the impact of the Supreme Court’s 5-4 decision in Obergefell v. Hodges granting same-sex couples rights to marry under the Fourteenth Amendment continues to unfold. Perhaps the most-quoted passage from Justice Anthony Kennedy’s opinion for the majority has been its final paragraph, which concludes: “Their [the petitioners’] hope is not to be condemned to live in loneliness, excluded from one of civilization’s oldest institutions. They ask for equal dignity in the eyes of the law. The Constitution grants them that right.”

If you have studied the history of marriage, however, it’s likely the first sentence of Kennedy’s last paragraph that stands out to you. “In forming a marital union,” he writes, “two people become something greater than once they were.” This formulation of matrimony, while it confirms our contemporary understanding of romantic love, doesn’t reflect the institution’s decidedly complex and unromantic historical legacy, something Martha Ertman, Carole & Hanan Sibel Research Professor at the University of Maryland School of Law, reckons with in Love’s Promises: How Formal and Informal Contracts Shape All Kinds of Families. Her book blends a memoir of her own experiences building a family by contract with her analysis of family law and contracts that underpin adoption, cohabitation, the use reproductive technology, and—most of all—marriage.

These “deep structural transformations” of marriage—as Ertman describes them—“recognize or reflect the fact that it changes over time.” In Love’s Promises, she illustrates the contrast between marriage past and present by comparing the experiences of first ladies Martha Washington and Michelle Obama to show how much the institution has evolved. Far from making “two people something greater than they once were,” for example, 19th-century marriage followed the common-law rule of coverture, which collapsed two people into one person: the husband. Under coverture, a wife was legally invisible after her marriage, in large measure because she could no longer enter into contracts. Not to mention the “breach of promise to marry” suits brought in response to broken engagements; they so clogged the 19th– and early 20th-century legal system that courts were obliged to rule that engagements were not legally binding contracts in order to get relief.

These detrimental but undeniable historical connections between marriage and contracts are a far cry from today’s world, where many people seek to deny any relevance between the two at all. The resistance to making contracts a part of family life—parenthood, cohabitation, and marriage—mystifies Ertman, who views contracts not as cold or calculating but as deeply expressive and potentially beneficial ways of affirming choices and validating contributions within any close relationship. In Love’s Promises, she argues that the law should recognize both the formal relationships codified by contract and those—like less conventional forms of parenthood and cohabitation—tailored informally by what she calls “deals”—arrangements about the more personal back-and-forth about who does what that define each relationship on its own terms.

“Maybe it’s because I teach contracts,” Ertman told Breadwinning and Caregiving Program Director Liza Mundy at a recent event at New America, but “it’s odd in my mind that you share a share a bathroom, you share a bed, and yet you can’t talk about who’s on the lease? There’s something really odd about closing your eyes, crossing your fingers, and hoping it’s all going to be all right.”

“Without contracts, I wouldn’t have a job, but I also wouldn’t have a family,” Ertman—who came out as gay in the 1980s—explained. A co-parenting agreement and some reproductive technology helped her create a family with her son and his father, a close gay male friend. A marriage contract and an amended parenting agreement expanded Ertman’s family to include her wife. At each step along the way, Ertman recalled, “we talked about what we thought and expected and wanted to give and get from this arrangement…I think that’s part of why it’s going well.”

Our collective discomfort with talking in detail about the give-and-take of a relationship and our hesitation to put our expectations in writing can lead to a number of legal complications. Among the most damaging is the unwillingness on the part of individuals and the courts to clarify the stakes of what Ertman calls pair-bond exchanges—in which one member of the relationship does a bigger share of the caregiving in exchange for greater financial support from the other member of the relationship. “I think when we mask the value of homemaking labor that does bad social things,” Ertman cautioned, “because it takes power away from people who are already disempowered.”

Citing stories described in her book, Ertman argued that courts are wrong to treat the caregiving work done for their partners by women and men (everything from childcare to eldercare) as a gift of love; she says it injures us as a culture to assume that “because it’s impossible to put a precise figure on it, we’re going to assume that all that work was basically worth nothing.” Sun Bonds, former wife of Barry Bonds, received no portion of his earnings in their divorce although he presumably benefited from her homemaking labor while they were married. Ertman also brought up the case of Harold, a Florida resident who nursed his partner Loretta on her deathbed with cancer, but because they’d done “everything but the vows,” her family took their joint property after her death. Harold sued, but was not compensated for either the time or his own money (including an inheritance) that he sacrificed for Loretta’s health. Ertman’s question is: do we really want to live in a society that says Harold’s caregiving role has no value?

“My hope in writing Love’s Promises is to make an argument for moral neutrality” around marriage, Ertman told Mundy and the audience. “Instead of coming from nature or God,” she emphasized, “I would say that families and love come in different packages.” Though still processing her reactions to the ruling as both a lesbian and a law professor, Ertman sees the Obergefell decision as to some degree making her book’s goal a reality: “to recognize that marriage is a human institution; it doesn’t come in one shape that fits everybody.”

She marvels at the reactionary language used by the dissenting justices and the ramifications of their worldview on other aspects of gender equality. “If marriage is about one man, one woman, then someone has to be the man, the woman,” she says, dismissing the idea that creating a legal imprimatur for traditional gender roles should—or even could—force adherence to a “one-size-fits-all” approach to family. She worries too that the consequences of Obergefell could be to replace one moral absolute—that homosexuality is unnatural and gays do not deserve constitutional protections—with another—“equally morally charged”—imperative of marriage as an absolute social good, to the exclusion of other kinds of relationships. She does, however, see potential for aging single Baby Boomers to keep institutions like civil unions and domestic partnerships vital as they look to build long-term companionship with fewer entanglements for their adult children.

Her evaluation of the post-Obergefell legal landscape is that it could spark what legal scholar Derrick Bell called “interest convergence” between gays and other groups and create models for future progress for “rights and duties about parenthood” that could include “efforts to recognize more than two parents.” In the arc of history from the 1986 Supreme Court ruling in Bowers v. Hardwick (which upheld the rights of states to make laws criminalizing homosexual encounters) to Obergefell, we can see the law as Ertman does: as a vehicle of expression for who we are and want to be as a society. Ertman sees this arc as evidence of what 19th-century (coverture-era) British jurist and legal historian Sir Henry Maine theorized as law and society’s move “from status to contract”—toward a modern world in which individuals are free to make contracts and form associations according to their own choices.

Jane Greenway Carr is an ACLS Public Fellow and Contributing Editor at New America. She holds a PhD from NYU and is the editor of The Brooklyn Quarterly. Follow her on Twitter @janegreenway. 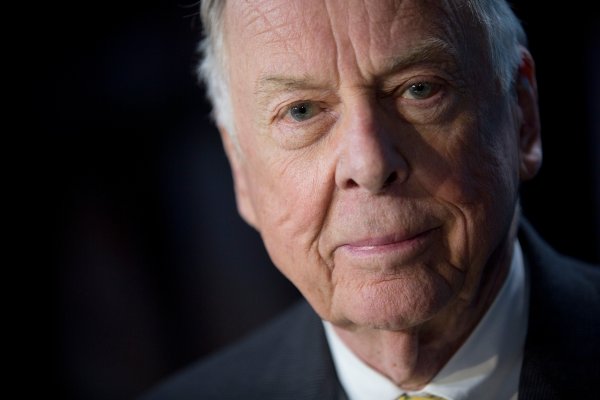 T. Boone Pickens: Natural Gas Is the Key To Winning the War on Terror
Next Up: Editor's Pick