The Cosby Show, The Dukes of Hazzard and the Ethics of Reruns

First the war is lost, then the icons come down. After the racist church massacre in Charleston, Confederate flags were belatedly lowered. And after the release of a deposition in which Bill Cosby–whom dozens of women have accused of drugging and raping them–admitted procuring Quaaludes to give “young women [he] wanted to have sex with,” Disney announced it would remove his statue from a theme park, like the Saddam Hussein statue being toppled in Firdos Square.

Thus with The Cosby Show and The Dukes of Hazzard themselves. The rejection of Confederate iconography proved too great a leap for the General Lee to clear, and Hazzard reruns were yanked from the air by TV Land. On July 7, Bounce and Centric, the last two cable channels rerunning The Cosby Show, pulled the show from their schedules.

Cable channels are businesses, and these were business decisions. Cosby and Hazzard were both well into their syndicated lifespans, and nobody is making a fortune rerunning either show at this point. (As Todd van der Werff pointed out, most of the money in these deals is paid out up front.) So there’s a lot more to lose than gain from having your brand associated with nostalgia for a slave-holders’ rebellion or with a celebrity facing ever-growing evidence of sexual predation.

As businesses, they made a sensible call. As a person, I have no tears for the General Lee or for Cosby. But as someone who believes TV, good and bad, is part of what we are, I hope the shows don’t disappear entirely.

I’ll say why in a second, but–because racism and rape are more important than the fate of reruns–I should first say what I’m not arguing. I don’t think the Confederate flag is an innocent symbol, or just about “pride.” I’m not arguing that Bill Cosby is innocent of rape: I’m not a judge or jury, but the chillingly similar testimony from around 40 women, over a span of years, is unignorable.

I’m not saying you’re obligated to “separate the art from the artist,” or not; that’s a personal call, and as I wrote before, it’s an especially tough one to make with Cosby, who so deliberately conflated his own persona with Cliff Huxtable’s even when he was making the show. I’m not arguing that you should watch the shows, or that you shouldn’t. (Dukes was not exactly a TV great; The Cosby Show was, but one that is honestly too awkward for me to enjoy now.) And I’m sure not saying that anyone should make a new show today with Cosby, or featuring a car emblazoned with the flag of Dixie.

But if you believe that pop culture matters, then it matters even when it’s uncomfortable (and sometimes for the very reasons it’s uncomfortable). The Cosby Show is a legitimate piece of American history. It advanced the representation of black families and culture on TV and–however ugly the irony now–showed a generation of kids an African American dad as a wise, successful father figure.

The Dukes of Hazzard is… um, not exactly the same artistic achievement, nor did it ever try to be. But even cheesy TV is a historical document: in this case, as I wrote earlier, the show is a time capsule of Carter-era pop culture and the pre-Reagan-era shift in conservative branding, to embrace the kind of counterculture, outsider language of “fightin’ the system” that the Tea Party still does today.

Of course, most fans probably watch it for the car chases, just like people watch Cosby for the one-liners. I can’t control the ideas other people take from TV, nor do I want to. Believing that TV matters for its ideas means making it accessible. And believing in the audience means that I don’t want the shows sealed off, as if they were the last remaining test tubes of smallpox virus, to be studied only by priestly critics like myself, lest they contaminate the masses. The worst tool for understanding history is the eraser.

This might be one of those cases, though, where media’s technology will let us leapfrog its ethics. The Cosby Show is still available to stream on Hulu, and The Dukes of Hazzard on Amazon, and there doesn’t (yet) seem to be much of an outcry to delete them from either. Maybe the idea of people opting in to the shows, through a subscription or download fee, is less provocative than their being pushed to your cable box. Or maybe the more mainstream cord-cutting becomes, the more of a target streaming will become.

But having TV shows accessible in our cultural library–treating them just as we would books or albums or movies–seems right. TV is part of history. And rerunning history isn’t the same as repeating it. 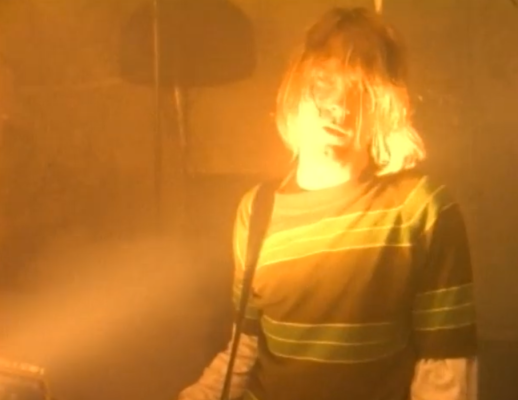 This Falling Shovel Sounds Exactly Like a Chord From 'Smells Like Teen Spirit'
Next Up: Editor's Pick