See the First Close-Up Photo of Mars Ever Taken

Almost exactly 50 years before the New Horizons probe brought us a new view of Pluto, the world got its first close-up glimpse of Mars.

Human beings had been looking at the planet forever—first as a distant reddish light in the sky, later with telescopes that presented a tantalizing view of what seemed like canals, weather and frost. But it wasn’t until July 15, 1965, when NASA’s Mariner IV mission made its first photo transmissions, that mankind got its first zoomed-in view of Mars. Though the mission also relayed important information about Mars’ atmosphere and radiation, it was the photography—from a mission that set a new record for long-distance communication—that got the most attention back on Earth.

The unmanned mission had been plagued by malfunctions early in its months-long journey and even on “encounter day,” July 14, there was a false alarm when it appeared that the recorder capturing the photographs wasn’t working right. Even taking the pictures was a difficult process—but it proved worth the trouble.

After all, these were no simple digital photos, easily snapped and transmitted. Rather, each image was composed of 40,000 dots, the way a dot-matrix image works, as shown in the NASA archival footage above. Each dot was coded to be one of 64 shades between pure white and pure black, and each number—from zero to 63—was represented in binary. It took nearly 9 hours to transmit the code for a single photo out of the 21 total that were taken. Because of the Earth’s rotation during that time, a team of different antennae had to be deployed to pick up different pieces of the Mariner’s transmission. Those pieces were then patched back together so that, by the next day, the first picture could be seen:

An enhanced contrast version of the first Mars photograph released on July 15, 1965
NASA/JPL

The fact that the photo wasn’t much to look at didn’t make it any less important, as TIME explained:

Read the full story from 1965, here in the TIME Vault: Portrait of a Planet 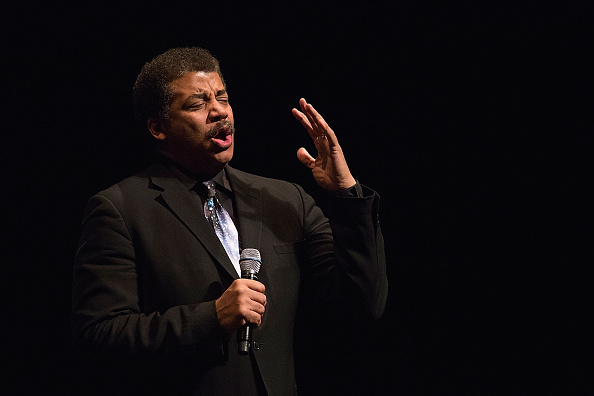 Neil deGrasse Tyson Is Totally Over Pluto
Next Up: Editor's Pick