In China, red is a lucky color. So instead of the normal crimson, the nation’s stock market uses green to denote shares that are down. As the Shanghai and Shenzhen indexes opened for trading on July 8, a forest of neon green settled across electronic stock boards nationwide. At one point, shares on the benchmark Shanghai Composite index had dropped 8.2%, before ending the day down 5.9%.

Wednesday’s rout, just the latest in a weeks-long collapse of a once frothy stock market, came even after around half of listings on the Shanghai and Shenzhen exchanges had suspended trading. If these companies hadn’t voluntarily sidelined themselves or been forced to do so by regulators, the drop-off would no doubt be more precipitous.

The latest tumult in the world’s second largest stock market comes despite Beijing unveiling an unprecedented array of incentives to coax shares back on a positive track. Since mid-June, more than $3 trillion in share value has evaporated. On Monday, China’s state media had vowed that a government action plan, including a forced pause in initial public offerings and a scheme by which top brokerages would spend nearly $20 billion to shore up the market, would reverse “fragile market sentiment.” Beijing’s unprecedented intervention dwarfed even the U.S. government’s TARP financial rescue plan. But by Wednesday, the nation’s security regulator was warning of “panic” by spooked investors. Beijing’s involvement didn’t seem to be working.

The percentage of total Chinese wealth tied up in the stock market is still relatively small. And even if Chinese bourses have lost around 30% of their value since mid-June, they’re still higher than a year ago. Nevertheless, confidence has taken a drubbing. For massive state-owned enterprises, the bourses had proven useful to offload debt. For tens of millions of ordinary Chinese, particularly retirees without enough savings to buy property, playing the stock market allowed them to augment meager state pensions that cannot keep up with today’s living costs. Many people borrowed money to invest in shares, magnifying the losses. Unlike in many other stock markets, the Chinese exchanges primarily attract amateur individual punters, not larger investors.

For one such punter, a 24-year-old state-owned bank employee from Nanjing who goes by the English name of Ted, 2015 has proved calamitous. He began investing in January, putting around 1 million yuan (roughly $160,000) in the market. Now he has less than $100,000 left and pulled out of the market completely on July 7. Ted estimates that around 70% of his friends had bought shares. “Now that this bull market has collapsed,” he says, “wealth has been redistributed and the middle class is annihilated.”

At the market’s peak on June 12, shares had more than doubled within a single year. Yet the relentless climb of Chinese shares, even as other economic indicators such as GDP growth and electricity usage sagged, led doubters to worry about a bubble. Now, the Chinese government has tied part of its legitimacy to shoring up the stock market — risky given this week’s volatility. Such intervention also goes against Chinese President Xi Jinping’s vow in 2013 to let market forces play a “decisive role,” as part of a larger reform initiative, prompting fears that his administration isn’t as committed to liberalizing the state-dominated economy as many had hoped.

On Wednesday, President Xi, along with central banker Zhou Xiaochuan, headed to Russia to attend a BRICS summit of emerging economic powers. Canceling their trip would presumably have further spooked China’s jittery investors. But the contagion may have already spread beyond mainland China. Hong Kong’s Hang Seng Index ended trading down 5.8%, Japan’s Nikkei 225 dropped 3.1% and the Taiwan Weighted fell 2.9%. For some Asian investors, the Greek drama playing out in Europe paled to the tragedy nearer to home. 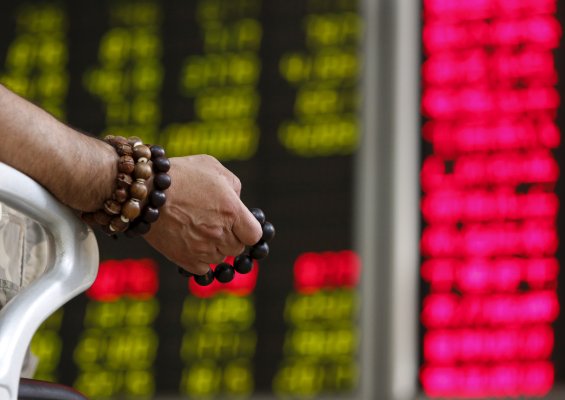 Will the Communist Party Save China's Volatile Stock Market?
Next Up: Editor's Pick