Macy’s, NBC and other businesses have cut business ties with Trump, the reality television star and real estate mogul, after said during his campaign launch that the immigrants coming into the U.S. from Mexico are “rapists.”

Fiorina, the former Hewlett-Packard chief executive, is seeking a place on the Republican debate stage this summer, a key step in gaining recognition in the race for the presidential nomination. She’ll need to do well enough in national polls to debate her competitors on stage, a feat that could be complicated by Trump’s entry into the race.

Trump has rocketed into second place in the race, according to a CNN poll released last week.

“I do think the media is sort of obsessed with him in a way that’s bizarre to me,” Fiorina said. “There’s a lot going on in the world and everybody keeps asking about Donald Trump.”

Fiorina is in the first-in-the-nation primary state of New Hampshire this week, meeting voters and touring local businesses. 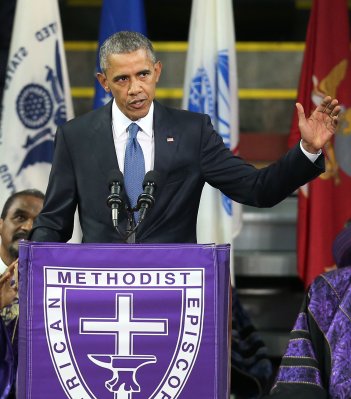 How President Obama Decided to Sing 'Amazing Grace'
Next Up: Editor's Pick