Bernie Sanders Hits a Triumphant Note As His Crowds Grow

Bernie Sanders, tan and slightly hoarse after six weeks of campaigning for president, began a stump speech on Monday night with a humble brag of epic proportions. “Sometimes, media people ask me, ‘Well, Bernie, why are so many people coming out to your events?’” Sanders said to a crowd of 7,500 people in Portland, Maine.

“Well the answer is, I think, pretty obvious,” Sanders continued, flashing a grin to cheers before getting stern again. “From Maine to California—we have friends in Alaska and Hawaii as well—the American people understand that establishment politics and establishment economics is not working for the middle class!”

The audiences are growing, he says, mostly because things in America are so bad. It’s a note of encouragement in the midst of Sanders’ famously jaundiced speeches, a nod to the tide of hope and discontent that his campaign is riding. “All over America, people are becoming involved in this campaign because they want change,” Sanders said. “Real change! And that is what this campaign is about.”

In a campaign by numbers, Sanders has taken a surprisingly strong grasp of the Democratic base. He drew crowds of thousands at several rallies in the last week, a notable feat 16 months before a general election. His poll numbers in the key early states of Iowa and New Hampshire show he is just a few paces behind Hillary Clinton, climbing within ten points of the presumptive Democratic nominee in one recent poll. And more than 250,000 people have donated to his campaign.

They are surprising metrics of success for a politician who for decades has seen himself as an outsider.

Sanders, who calls himself a democratic socialist, has done it armed with the promise of revolution. “The only way that change takes place is when we develop that strong grassroots movement, make that political revolution, stand together,” Sanders said on Monday. “And then we bring about change.”

Sanders had originally planned his Monday night rally in this seaside city of 66,000 people at a small venue on the water, but after thousands of RSVPs came back online, he was forced to reschedule the speech in a large arena usually reserved for big musical acts and hockey games. Nearly 8,000 people showed up, flooding the standing room with Mainers touting an eclectic mix of tribal tattoos, floral prints, polo shirts and New Balance sneakers.

Sanders’ supporters found in Portland a candidate invigorated by the last months of success. With his left hand gripping the podium and his right hand dancing in the air as if holding a marionette, Sanders framed the recent liberal groundswell as part of a long legacy of activism. He pointed to the labor movement of the early 20th century, the women’s suffrage activists and the civil rights movement as models for changing the country. He called for equal pay, paid family leave, a higher minimum wage, breaking up the big banks, and a massive infrastructure rebuilding program, a la the New Deal.

The crowds have taken note of Bernie’s sanguine outlook and call to action.

“He’s telling us that the people’s movements—the grassroots movements—have succeeded when people got off their asses and they went out and marched,” said James Murdoch, a self-employed designer and builder who attended the rally. “We’re now getting to the point where people are getting involved and getting active again.”

Portland was just one leg on Sanders’ packed schedule: after a Madison, Wisconsin rally on Wednesday that drew some 9,500 people, Sanders spent three days in western Iowa corn country, where in Council Bluffs, 2,500 people attended a rally, according to the campaign—more than any other Iowa rally so far. (In Iowa he is trailing Clinton by 52-33.) He flew back to Burlington, and then drove with his wife and an aide the 250-odd miles to Portland.

Despite some of the change in tone, Sanders’ speeches are still largely jeremiads on the perennial problems. Wall Street and the greed of the 1% are destroying America, Sanders says, climate change is wreaking drought and deadly heat waves, and misguided trade agreements are sending millions of jobs overseas to countries like China. There’s only a short window of opportunity to stop global warming, and the middle class is in grave danger.

Among his fans, there’s a new hint of faith that the gravity of the campaign may have jolted something awake. People in the audience said afterward that Sanders had struck a chord, particularly for those disappointed by the Obama years and cautious of the hope brand that dominated the 2008 campaign. “He’s saying the things that need to be said,” said Fran Falcone, a mental health counselor, of Sanders. “We need to start really looking at what’s going in our country that’s turned it into a place a lot of us don’t recognize.”

After the speech, Sanders dined at a Spanish-inspired restaurant a few blocks away on Portland’s Congress Street. Word got around town he was there, and a small crowd gathered to seem him before he went to bed and made for Washington D.C. the next day for Senate duties.

Meanwhile, two buddies drank beers on the upstairs terrace of an Irish pub one block from the rally arena. They discussed the reality-check-and-momentum phenomenon. “Campaigns have cycles,” said Portland resident Doug Hall about Sanders, speaking over the house music. “This is the wake-the-f***-up cycle.”

Paul Drinan, who runs a non-profit and also lives in town, agreed. “At this point in the game that’s the appeal: there’s no fluff in the message. He’s telling it like it is,” said Drinan. “Bernie’s riding the wave.” 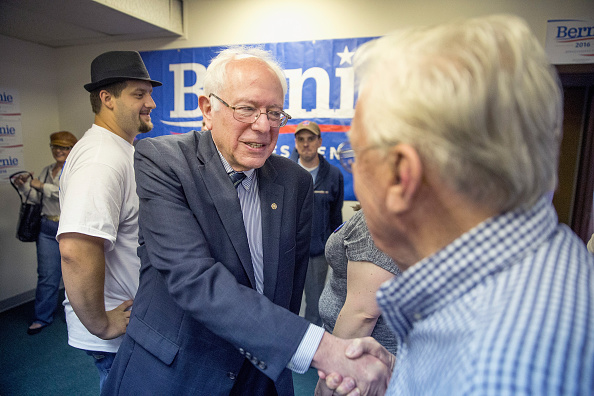 Sanders Calls For Broader End to Deportations
Next Up: Editor's Pick