What Meat Eaters Get Wrong About Vegetarians

I was 20 years old and working on a political campaign when I first visited a slaughterhouse. There I saw dead chickens swinging like pale acrobats on a conveyor belt suspended over a vat, and I met a man who called himself, with only a hint of irony, a “goop scooper.” I walked out with the vague idea that I might become a vegetarian one day.

Years later, I stopped eating meat and chicken. On rare occasions, I still have fish, but that grows increasingly less common as the years go by. I am not a vegetable evangelist; I happily coexist with carnivorous members of my family and have friends who worship at the shrine of cooked cow. But permit me to dispense with three myths about vegetarians on behalf of those who, like me, favor beans over beef.

1. Vegetarians are self-righteous. Friends, self-righteousness is a universal quality. Whatever habits people hold dear, they tend to discuss in moral terms. So yes, some vegetarians slide into self-righteousness, but have you ever heard hunters defend their hobby? Or meat eaters talk about the design of the human body, digestive system, and manifest evolutionary advantages? I have had people tell me they cannot be vegetarians because they are “foodies” with the same pride as if announcing they are relief workers in the Congo.

Self-righteousness is more a personality trait than an accompaniment of a political or social position. And sometimes the very accusation is a species of the same malady: “Oh, she is SO self-righteous; I can’t STAND people who are like that. It’s just wrong.” Well yes, it is.

2. Vegetarians are sickly. Yes, I have met sickly vegetarians. But you can be just as healthy on a vegetarian diet as on any other. Someone dear to me told me that when she became a vegetarian, her father, a doctor, said she would be dead in a year. Decades later, his prediction is looking increasingly dubious.

I won’t go on a rant about meat additives, pesticides, disputes about “organic,” and the endless rabbit hole of diet and nutrition advice. But please, let’s not assume that all vegetarians are sick any more than we should assume that all meat eaters are healthy. In a country where obesity is a major health threat, large, heaping plates of broccoli are not the principal culprit.

3. Vegetarian food is tasteless. OK, maybe you don’t like tofu (I do, and it can be prepared in almost endless ways). But good vegetarian or vegan cooking is wonderful, just like good cooking of all types. There are now excellent vegetarian restaurants all across the country where you can test the truth of that statement. And there are vegetarian options in most other restaurants, too. After all, penne arrabiata and bean tacos are vegetarian. Taste in food, as in anything else, adjusts over time, and we come to appreciate nuances in food just as we do in music.

This is not a summer manifesto for change. I do not expect that suddenly Homer Simpson will be tossing seitan steaks on his barbecue. But the cruelty with which most animals are bred, and the resources meat demands from the earth are genuine issues and shouldn’t be simply dismissed. At the very least, let’s concede that vegetarianism is a worthy and thoughtful option and raise a glass (wine = grapes = fruit, after all) to the majesty of plants. Or as a friend of mine puts it, here’s to feeding on things without faces. 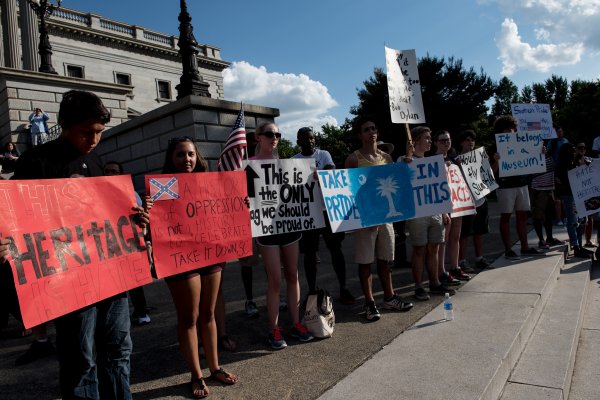 Why Millennials Can't Afford to Be Colorblind
Next Up: Editor's Pick