When you’re Donald Trump, another rescinded corporate partnership is nothing if not an opportunity to galvanize your supposedly growing base of political supporters.

The billionaire real estate mogul, reality-television personality, and Republican presidential hopeful has spent the past week taking Twitter pot-shots at Macy’s after the department store chain severed ties with Trump and his line of menswear amid the uproar over Trump’s recent derogatory comments about Mexican immigrants.

On Monday, Trump — who, last week, gleefully pointed out on Twitter when Macy’s stock had fallen by less than 0.5% — tweeted out a claim that his supporters have been cutting up their Macy’s credit cards “as a protest” against the U.S. government’s stance on immigration:

Trump has long been a proponent of beefing up American borders to stem the influx of illegal immigrants. But, in his presidential campaign kick-off speech last month, the outspoken billionaire attracted quite a bit of criticism with comments accusing Mexican immigrants of committing serious crimes in the U.S., from rape to murder and drug dealing.

In addition to Macy’s, mattress giant Serta also said it would stop selling Trump-branded products, while both Univision and Comcast’s NBCUniversal have canceled plans to air Trump’s Miss USA and Miss Universe beauty pageants. (Trump sued Univision for $500 million and has threatened legal action against NBC and others.)

While Trump’s corporate partnerships seem to be rapidly evaporating, the presidential candidate has seen a bump at the polls in the past week with decent showings in a recent national CNN poll as well as the New Hampshire primary polls. 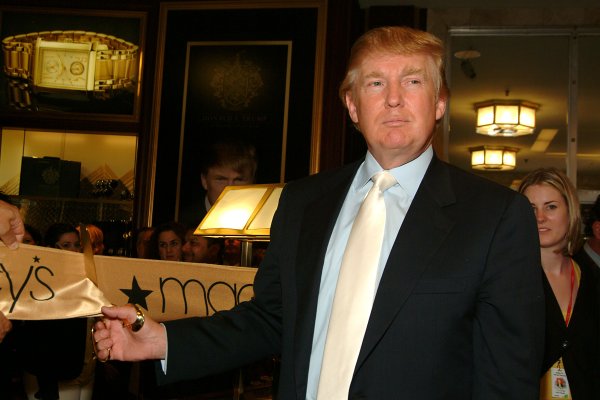