American Apparel is planning to cut expenses by $30 million by closing underperforming stores and laying off staff, but warned it may not be enough to run its business in the near future.

The unprofitable retailer has recently angled to reposition itself as a more responsibly-run company under the direction of CEO Paula Schneider, who took the helm in January. Schneider last month unveiled plans to grow the brand to a $1 billion business by focusing less on sexual innuendo and instead caring more about merchandise. But Schneider has conceded the company has very little cash to play with to undergo this pivot.

American Apparel’s most recent press statement is a reminder of this conundrum. The retailer warned that even if it boosts revenue and cut costs, “there can be no guarantee that the company will have sufficient financing commitments to meet funding requirements for the next twelve months without raising additional capital.” It also warned there is no way it can be sure it can raise such capital.

The cost-cutting moves will occur of the next 18 months and include a smaller work force to reflect the smaller store footprint. American Apparel wouldn’t say how many jobs or stores would be affected. The California-based retailer operated 239 stores in 20 countries and employed about 10,000 people as of the end of March.

American Apparel, which touted its plans for the fall season from a merchandising perspective, also lamented that the company continued to deal with number of legacy issues left behind under the management of ousted founder and former CEO Dov Charney, who has been busy suing the company.

“Today’s announcements are necessary steps to help American Apparel adapt to headwinds in the retail industry, preserve jobs for the overwhelming majority of our 10,000 employees and return the business to long-term profitability,” Schneider said. 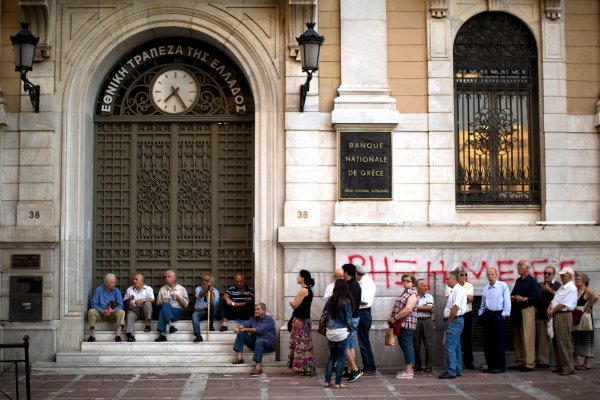 Could You Live on $64 a Day If Greece's Crisis Hit Home?
Next Up: Editor's Pick