United States' Carli Lloyd celebrates after scoring her third goal against Japan during the first half of the FIFA Women's World Cup soccer championship in Vancouver on July 5, 2015.
Elaine Thompson—AP
By Jacqueline Andriakos / People

Soccer star Carli Lloyd hasn’t “slept a wink” since Sunday’s FIFA Women’s World Cup win in Vancouver. But after helping bring the team to victory for the first time since 1999 – and a historic hat-trick – how could she?

“We didn’t come here to take second place. We came here to win it, and there was something different in the air with these last few games with our team,” the 32-year-old midfielder said on Good Morning America on Monday.

“I think we all believed. We all knew it,” she said. “We felt it and what a convincing win today to get it done.”

Nicknamed Captain America after the 5-2 victory against Japan in Vancouver, Lloyd also said she imagined the turn of events back in May while out on a run prepping for the big games. She said during the interview that she visualized herself ahead of time scoring “four or five” goals in the final.

“It’s just crazy what the mind can do,” she added.

The New Jersey native said celebration is taking priority over sleep for the time being.

“[I’ve] barely been able to get through text messages and some of the social media stuff,” she said. “I had some teammates telling me that Mr. President Tweeted me, got to meet Joe Biden today so that was pretty cool.”

“I think it’s huge for women’s soccer,” Lloyd went on. “The energy and atmosphere was just unbelievable this World Cup.”

But the athlete hasn’t fully come to terms with her record-breaking victory just yet. She told the Today show’s Matt Lauer on Monday that it “just didn’t feel real.”

“It was unbelievable, something we have all wanted so long. The heartbreak in 2011, losing to Japan, and then this game – it was just an unbelievable moment, something we’ll cherish for the rest of our lives.”

Lloyd, who has been on the U.S. team since 2005, completed a hat-trick against Japan within the first 16 minutes, an accomplishment she described as “pretty incredible.” (The three-goal maneuver was the fastest hat-trick in World Cup history.)

“It’s hard because you go through these journeys year after year and you’re just so focused on the one thing you have and you don’t ever stop and think about how much you’ve accomplished,” she told Lauer. “I will savor and cherish this moment for a little bit because all the hard work has paid off.”

Lloyd scored goals in four consecutive matches during the tournament, ending with a total of six scoring games. But it wouldn’t have been possible without her teammates, she explained, including Alex Morgan, Sydney Leroux and Abby Wambach.

“We looked down at these stars and one of those stars belongs to us and will always belong to us. We’re just super, super happy,” Lloyd said. “I think that a lot of us needed to pinch ourselves to see if this was really happening just because of the way that it all unfolded from start to finish. It was just an epic journey one will never forget.” 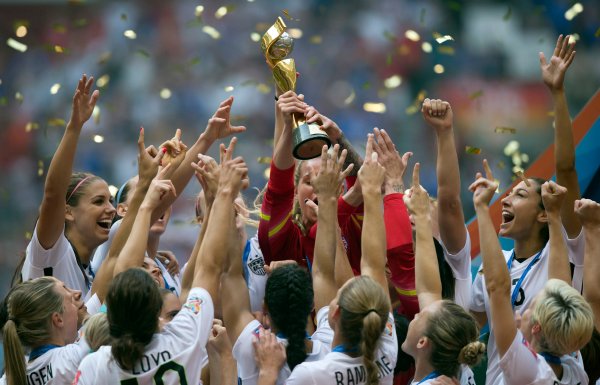