The world-famous Ed Sullivan Theater marquee, which has displayed “The Late Show with David Letterman” since 1993, has gotten an unexpected makeover.

The theater is busy preparing for Stephen Colbert’s debut on the Late Show stage in September, but CBS didn’t want renovations hampering business for their long-time neighbor, Angelo’s Pizza. Instead, a new marquee was unveiled on Monday featuring a reclining Colbert chomping down on some pizza and letting pedestrians know that Angelo’s is open during renovations.

The best part? CBS offered it free of charge.

“They moved the old marquee down and it looked like a dead place,” Alex Kondilis, the restaurant’s manager, told TIME. “They offered to do that for free, just to help us.”

This is surely just a little taste of what Colbert has in store. He is set to start hosting the Late Show on September 8. 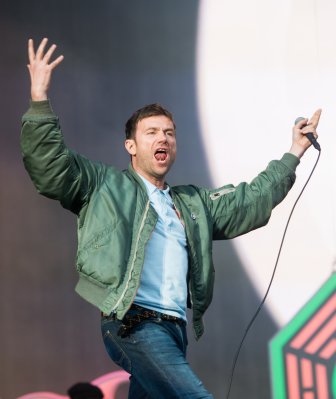 Watch Damon Albarn Get Carried Off Stage After Refusing to Stop the Music
Next Up: Editor's Pick