How a Drug Trade Dissolved When the Grateful Dead Stopped Touring

Phil Lesh, Bob Weir, and Jerry Garcia of The Grateful Dead perform at Shoreline Amphitheatre on June 2, 1995 in Mountain View, Calif., shortly before their final concert together.
Tim Mosenfelder—Getty Images
By Jennifer Latson

The Grateful Dead’s final show with Jerry Garcia marked the end of an era—for music lovers and acid trippers alike.

Twenty years ago today, on July 9, 1995, the consummate jam band played live for the last time at Chicago’s Soldier Field. Frontman Garcia died the following month, at 53. This past weekend, the band’s surviving members plus guest artists, including Trey Anastasio of that other jam band, Phish, commemorated the historic concert and the 50th anniversary of the Grateful Dead’s formation with a three-show tribute at the same venue.

But while fans mourned the end of the band’s 30-year run, the final show heralded another milestone: a steep decline in the use of LSD, which still hasn’t bounced back. Drug Enforcement Administration (DEA) agent—who ostensibly went to great tie-dyed lengths to blend in with what TIME estimated, in 1985, to be between 10,000 and 37,351 devoted Deadheads—discovered that, without the shows to bring acid users and their dealers together, the supply chain became irrevocably severed, per Slate. “Phish picked up part of the Dead’s fan base—and presumably vestiges of the LSD delivery system,” Ryan Grim, who later wrote a book on drug culture in America, wrote for the site in 2004. “At the end of 2000, Phish stopped touring as well, and perhaps not coincidentally, [reported LSD use] began to plummet.”

LSD had been an essential element of the Grateful Dead experience from their early days, when they were “the house band for (Ken Kesey’s) acid tests,” according to What’s That Sound?: An Introduction to Rock and Its History. And it’s worth noting that even some of the DEA’s later acid busts retained a Grateful Dead connection, such as the 2007 arrest of an Alaskan drug dealer with the words “DEAD” and “HEAD” tattooed on his knuckles—who, according to a DEA press release, “proclaimed ‘Sweet!’ when he received (a package containing LSD) from an officer posing as a postal service employee.”

The Grateful Dead’s music was more than just a soundtrack for psychedelic trips, of course. As TIME’s late film critic, Richard Corliss, noted in 1995, the band had fans far and wide—including some who presumably dropped little, if any, acid: then-Vice President Al Gore, Massachusetts Governor Bill Weld, and Vermont Senator Patrick Leahy, among others. Corliss added:

Recently, some researchers have investigated beneficial medical uses of psychedelic drugs—but acid was only one element of Garcia’s pharmacological experiments, which also extended to the heroin he also regularly used. And while sales of LSD tanked after the Dead stopped touring, heroin has only flourished. If Garcia’s early death could be taken as a warning against long-term drug use, his celebrity gave it a glamorous luster, according to Corliss, who wrote: 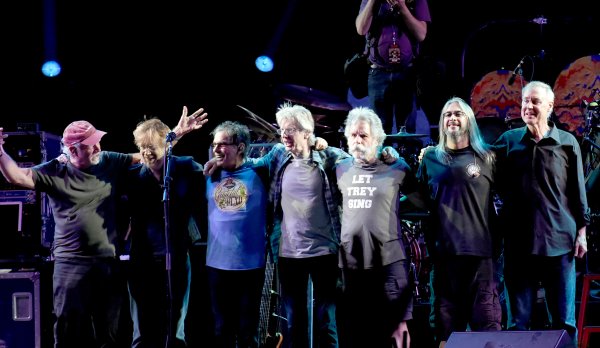