By now, everyone knows the outcome of the story. On the morning of Sunday, June 28, SpaceX CRS-7 launched in spectacular fashion from NASA’s Kennedy Space Center in Cape Canaveral, Florida. Just two minutes and 19 seconds into flight, the Falcon 9 rocket and cargo-laden Dragon capsule exploded above the Atlantic ocean, incinerating approximately 4,000 pounds of supplies to be delivered to the ISS. The cause remains unknown.

Rundowns of the items aboard CRS-7 have been circulated throughout news reports and abbreviated in terse, 140 character tweets: student science projects, privately-funded experiments, food, water filtration systems, hardware, oxygen. The astronauts aboard the ISS are safe until October. The Russians launched a resupply mission last week; the Japanese have one set for August. Surely we can’t all fail.

I watched the Falcon 9 lift off that sunny morning in June while standing atop an empty causeway at Kennedy, as close as any civilian could hope to get to a launch. By the time CRS-7 failed, it was only a small speck of light high above my head. I squinted into the bright sun and craned my neck, turning to the woman beside me and asking: “Was that separation or an explosion?” We weren’t sure.

When the failure was confirmed by nearby NASA employees, I felt a sinking in the pit of my stomach, like waking up from a good dream and feeling it all slip away. Thankfully, there were no humans aboard the Dragon capsule that day. But all American space missions in today’s experimental age of public-private partnerships are defined by a sense of potential, carrying a degree of hope — the hope that one day, blasting equipment and human beings out of Earth’s atmosphere could be as routine as a neighborhood grocery run. While CRS-7’s failure won’t single-handedly kill that dream, it does remind us that future is a little father off than we might have thought.

I was on site at Kennedy to witness the launch that morning thanks to something called a NASA Social, part of a program run by the space agency’s public affairs department that invites high-profile social media users to get the same access to a launch or other major event afforded to the credentialed press.

On the morning of Friday, June 26th, approximately 48 hours before launch, 30 people assembled in the nondescript Press Annex that sits on site at Kennedy Space Center in direct view of the famous VAB (Vehicle Assembly Building). I was among them, an eager participant in NASA Social. Investment in unconventional social media ambassadors is nothing new for NASA. Its Curiosity Rover has been sending updates from Mars via a colorful Twitter account that boasts nearly 2 million followers, more than most sentient beings. But allowing space geeks with little connection to mainstream news outlets access to an otherwise inaccessible experience is a smart exercise in public relations.

“Our target audience is humanity,” NASA Social Media Manager John Yembrick told us of the NASA Social program. Our group was stuffed with such strange bedfellows as PhDs in theoretical physics and geology, a former wrestling star, a fashion photographer, Florida natives and a woman who flew from Australia. Human beings with vastly different skill sets and social audiences united for three days to furiously tweet, post, share, like and tag every second of the adventure.

We spoke with the likes of NASA Chief Scientist for the International Space Station Dr. Julie Robinson, SpaceX Vice President Hans Koenigsmann, and Microsoft’s Alex Kipman, who arrived carrying a HoloLens augmented reality headset he hopes will revolutionize communication between astronauts and Earth. We met young students who described an experiment they would launch on CRS-7: a genius proposition to use earthworms for trash composting aboard the space station. We toured the facilities where spacecraft are assembled and parts are created. We saw the second of two identical International Docking Adaptors meant to standardize the ISS docking process for different companies and countries; the first was already loaded on the ill-fated Dragon, now lost.

If NASA’s goal with the NASA Social program is to pay service to the Space Believers while cultivating new ones, it’s a rousing success — the sense of potential was palpable among the group. But none of that energy can change this immutable rule: space is hard, and we have much to learn. In his reply to my Facebook post about the loss I felt after watching the Falcon 9 rocket disintegrate into oblivion, NASA Astronaut Ron Garan offered the following: “The lessons learned from the failure will save lives down the road when Dragon launches crew.” He’s right, of course. But it’s still difficult to get swept up in the excitement of space travel, only to be confronted with an explosive reminder of how far the future remains.

Erin Sharoni is a Creative Strategist at biotech startup InsideTracker, a writer for DJ Mag and an electronic dance music DJ and producer. 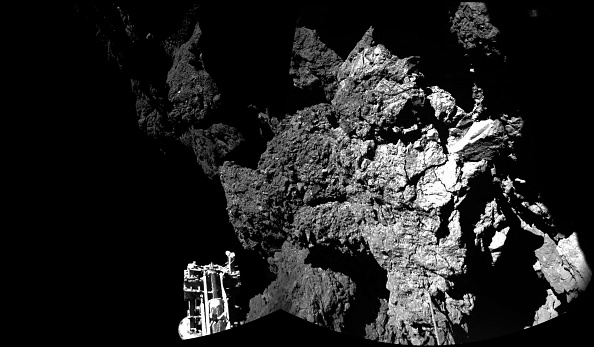 Comet Could Be Home to Microbial Alien Life
Next Up: Editor's Pick