Why Greece Matters for Everyone

Greece is a tiny country. It’s 0.3 % of the GDP of the world. Most private creditors took their money out of the debt-ridden nation years ago. So why is the possible exit of Greece from the Eurozone rocking markets? Because it represents what could be the end of the biggest, most benevolent experiment in globalization, ever.

On Sunday, Greek voters said “no” to Europe’s latest bailout offer. That means that a Greek exit from the Eurozone is now very likely–most analysts are putting the odds at somewhere around 60%-70% at this point. For Greeks, the next few weeks will be chaotic. Banks are closed; last week, people could take only 60 euros at a time out of ATM machines, this week it may go to as little as 20 euros. Merchants have begun eschewing credit cards in favor of hard currency as a cash hoarding mindset kicks in.

Global markets are not surprisingly down on the news and will likely be quite jittery for the next few weeks. It’s not that the economy of Greece itself matters so much–China creates a new Greece every six weeks–it’s that a Greek exit from the Eurozone calls into question the entire European experiment. Europe was always an exercise in faith: 19 countries coming together to form a made-up currency without any common fiscal policy or true political integration seemed like a great idea in good times, but was destined to be fragile in bad times.

MORE: Here’s What Greek Austerity Would Look Like in America

The risk now is that a chaotic Greek exit from the Eurozone starts to undermine faith in other peripheral countries, like Italy or Spain. Watch what their bond spreads do over the next few days. If they rise a lot, it means investors are worried. While ECB head Mario Draghi has promised money dumps to help stabilize these nations and any other Eurozone countries that need help (perhaps we should start calling him “Helicoper” Mario), he can’t stop the euro from falling against the dollar, or keep investors from fleeing to “safe havens” like US T-bills. That might be good for US bond markets, but Europe’s crisis could also impact the Fed’s ability to raise interest rates in September, which until quite recently seemed like a sure thing.

No wonder President Obama and Jack Lew are getting vocal about it all–while this isn’t going to be a Lehman Brother’s style domino collapse of financial institutions (private creditors represent only about 12 % of Greek debt; most got their money out back in 2011 or 2012), there’s little question that Europe’s growth will slow, which will affect US companies and workers. The stronger dollar will also hurt US exporters.

But even more important than the short-term jitters are the longer-term economic and geopolitical impacts of the Eurozone crisis. One of the reasons that Russia has been so aggressive in places like the Ukraine is that Europe is perceived as being weak, unable to make the political integrations that would actually solve this debt crisis permanently. (That would require creating a real United States of Europe–something that requires German buy in.)

MORE: Greece Says ‘No’ to Austerity

The Greeks may think that a “no” vote to Europe has increased their power to bargain for a third bailout, but I think it will be very hard to convince German voters of that (and any deal will have to pass through the Bundestag). Germans simply don’t understand why the rest of Europe can’t be more like them, despite the fact that the math doesn’t really work.

If Greece is left on its own, where will it turn for support? To Russia, China, and any number of countries in the Middle East. Suddenly, you’ve got the stability of the Balkans in play. And as it becomes clear that the future of the world’s second largest reserve currency isn’t necessary a given, that could weaken investment in Europe as a whole, throw the Eurozone back into recession, and undermine the EU on the world stage. A political bloc that can’t guarantee its own currency will also have reduced clout in any kind of political negotiation. Europe’s weakness could be very destabilizing at a time when America’s own geopolitical power has ebbed.

That’s bad news for everyone. Europe is one of the three legs of the global economic stool, along with the U.S. and China, which is in the middle of its own debt crisis. America’s recovery isn’t strong enough to pull the world along. Europe’s debt crisis is not only an economic crisis but also a political crisis–one that poses challenges not just the EU itself, but liberal democracy as the model of the future. 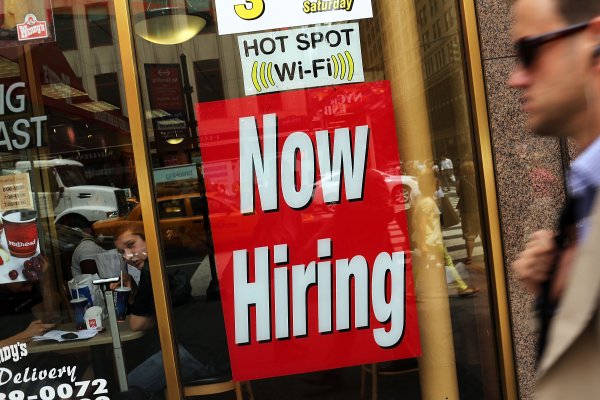 U.S. Unemployment Rate Drops to 5.3%
Next Up: Editor's Pick