A suicide bombing at a church in Potiskum on Sunday, and dual explosions in the central city of Jos in the early hours of Monday morning local time, have shaken Nigeria and mark the end of a week of atrocities in the embattled country that has left more than 200 dead.

The explosions in Jos, at a mosque and a popular restaurant, killed 44 people and wounded 67 early morning July 6, the AP reports. Witnesses said the bombing at Yantaya Mosque took place during a lecture by a leading cleric famous for preaching peaceful co-existence. The second bomb exploded at Shagalinku, a restaurant known to cater to the political elite.

No one has claimed responsibility for the church blast in Potiskum, which killed a priest and four congregants, but it is consistent with past attacks attributed to militant Islamist group Boko Haram, CNN reports.

Potiskum has recently been the focus of Boko Haram violence; in January, three people were killed and 43 hurt during a bombing in a market, and the next week another attack left four dead and 48 hurt at a bus station. Another bus station was attacked in February, killing 17, and in May the town’s College of Administrative and Business Studies was targeted.

Jos is also often a target for violence, as it sits on the fault line between the country’s Christian south and Muslim north.

Additionally, this past week has seen what new Nigerian President Muhammadu Buhari described as a “heinous” burst of violence, the BBC reports, including suicide bombings in two small Borno villages, the killing of 97 people near Lake Chad, and 48 men shot dead in two villages near Monguno.

Amnesty International estimates that more than 17,000 people have been killed since 2009 in violence involving Boko Haram. 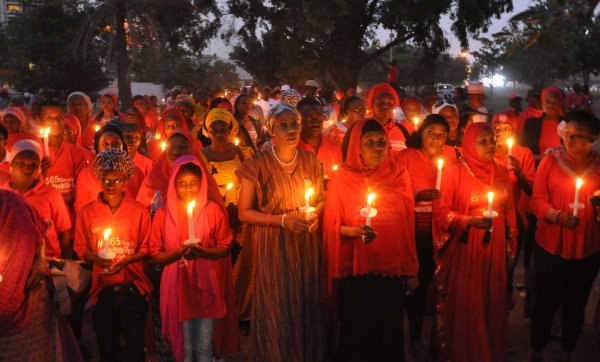 How 4 Girls Escaped Boko Haram to End Up in Oregon
Next Up: Editor's Pick