Europe’s leaders are faced with a tough choice after Greek voters rejected austerity conditions attached to a new bailout in a referendum on Sunday: fundamentally alter their policies for dragging Europe back to prosperity, or lose a member of a currency union that was meant to represent the political and economic strength of the whole continent.

On Tuesday, leaders of the 19 countries that use the euro will meet in Brussels to grapple with the implications of the referendum result, which saw more than 60% of the Greek electorate vote No to a package of spending cuts and new taxes in return for more loans.

Beyond the economic contagion of a potential Greek exit from the Eurozone, there are lasting political ramifications for all 28 European Union members, regardless of which path they choose.

For an alliance constantly fighting accusations that it is stacked with unelected officials foisting ruinous policies on struggling members, ignoring the will of the Greek people and soldiering on with its tough austerity policies would deal another blow to its democratic credentials. A Greek exit from the single currency would also shatter the dreams of many European leaders who see the euro as the ultimate symbol of the bloc’s political union.

But returning to the negotiating table with Greek Prime Minister Alexis Tspiras and forging a new bailout deal with less stringent conditions could embolden other far-left parities across the E.U. It would also spark a backlash both in richer creditor nations like Germany, and other bailout countries such as Ireland and Portugal that had to endure the pain of reform programs.

Much depends on whose pre-vote bluster wins out. Ahead of the referendum, Tspiras said a No vote would give him a stronger hand in negotiations and he could return to Brussels with a mandate to prioritize social justice and get a better deal for a nation that has endured the highest unemployment rates in the E.U. and a plummeting quality of life.

Eurozone leaders, however, threatened that rejecting the terms on the table after six months of negotiations was a vote for leaving the single currency, and right now the hawks are remaining adamant that Greece has blown its last chance of being part of the euro club.

The German economy minister, Sigmar Gabriel, said that the vote meant Tsipras had “torn down the last bridges across which Europe and Greece could move toward a compromise”. He told the German newspaper, Tagesspiegel, that the vote was essentially a rejection of the Eurozone’s rules.

Slovakia’s Finance Minister, Peter Kažimír, tweeted that he was “disappointed” by the vote and now “the nightmare… that a country could leave the club seems like a realistic scenario”.

That path would begin with the European Central Bank (ECB) cutting off the emergency funding that has kept Greece afloat even after it defaulted on existing loans. Athens would have to start printing its own currency, meaning a de facto exit from the Eurozone. Exactly how the other Eurozone nations would mange this and contain any economic fallout is uncharted territory.

The “Grexit” option would also likely lead to a prolonged depression in Greece and a potential humanitarian disaster. That prospects has some voices around Europe arguing for a return to the negotiating table. Gianni Pittella, the leaders of the Socialists and Democrats in the European Parliament, called for the resumption of talks “inspired by a new attitude of solidarity and cooperation, taking into account the difficult social dimension in Greece”.

The Italian foreign minister, Paolo Gentiloni, also came out in favor of more negotiations, tweeting that “Now it is right to start trying for an agreement again”.

But there is so much bad blood now between the Greek government and its creditors in the Eurozone, the ECB and the International Monetary Fund that a calm and collected round of negotiations seems unthinkable. Talks have been increasingly combative since Tspiras’ far-left Syriza party was elected in January, and his finance minister has accused the creditors of “terrorism”.

The first hurdle is staying afloat for the next few days, and the ECB must now decide whether to continue the emergency funding for Greece while the Eurozone leaders meet.

Whatever happens in the next few days, Raoul Ruparel of the Open Europe think tank said the referendum would bring “profound change”. Either the Eurozone will “capitulate to Greece… changing its entire modus operandi” or Greece will have to leave the Eurozone.

“In which case the E.U. and the Eurozone will be fundamentally changed,” he wrote on his blog. “The E.U. will have to reconsider its ‘ever closer union’ mantra and accept that its flawed approach and inflexible institutions have helped precipitate the downfall of one of its guiding principles.” 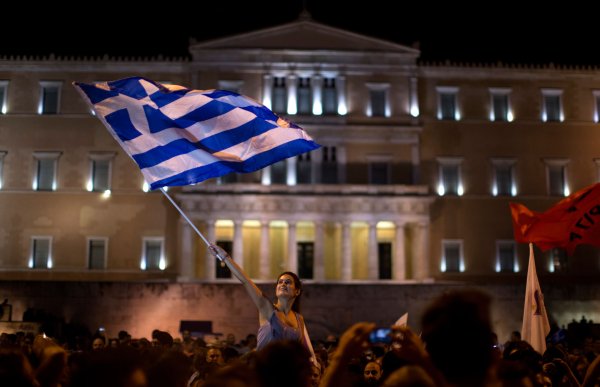