In the end, it was all over in an instant.

Greeks on Sunday returned a decisive ‘No’ vote on a historical referendum to decide whether it would keep its crippling bailout program in order to repay international creditors, or support its government’s plan to demand a better deal for its citizens.

As soon as the result was secure – within an hour it was evident that Greeks were not as divided as polls and politicians suggested, triumphant ‘No’ campaigners flocked to Syntagma Square, or Constitution Square — the soul of the Greek anti-austerity movement.

Within 2 hours of polls closing, the result was absolute. At that point, 40 per cent of votes were counted and the ‘No’ side retained a steady lead – rarely dipping below 60 percent.

The question itself was confusing; given the bailout program had actually expired a week earlier and the actual consequences of voting “Yes” or “No,” having not been fully explained voters.

Those consequences remain unknown, but Greeks believe their futures are safe and Europe won’t force them out.

“This a cheap joke,” says 26-year-old Dimitrius, when asked whether Sunday’s result spells the end for Greece in the euro.

“Everybody who knows geopolitics and economics knows that if Greece leaves the eurozone then the eurozone will collapse in 2 years, maximum,” he added.

Wrapped in an oversize Greek flag, 32-year old Olyssea says today was about governments realising that they’re “dealing with people, and not numbers or objects.”

Its fate in the eurozone now hangs in the balance, and it’s highly unlikely that that it’s banks will reopen this week.

The banks are dangerously low on cash, and a crucial meeting at the European Central Bank Monday will decide whether to provide emergency funding to keep money in Greek ATMs.

Meanwhile, Prime Minister Alexis Tsipras insists a better deal is in the offing, even though the Syriza-led government has lost practically lost all its allies in Europe at least among its fellow eurozone states.

Tsipras reiterated his position on Sunday night, saying that the mandate given to him as a result of the poll doesn’t call for a break with Europe but “rather gives me greater negotiating strength.”

He said his “immediate priority is to restore our banking systems and economic stability”.

Late into the night, thousands of young Greeks continued the rallying cry of the campaign “Oxi, Oxi, Oxi” – “No, No, No.”

Banging drums, sounding foghorns and waving Greek flags, the mood was celebratory amid a large presence of riot police.

“We Greeks have a great culture; going back ancient times and centuries – it can’t be lost or taken away by (German Chancellor Angela) Merkel or anyone else in Europe,” said 29-year-old Nathalie.

“We have our country back in our hands now.” 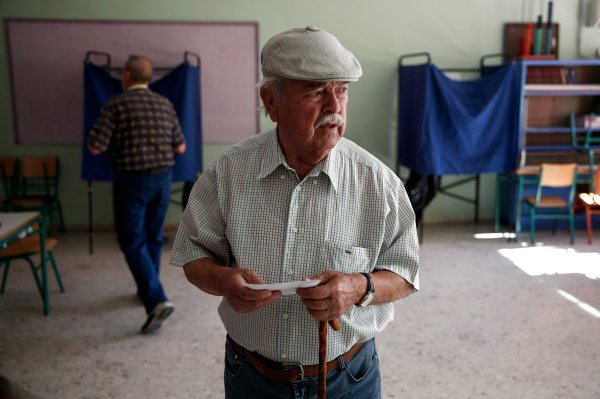 Voting Winds Down in Greece Amid High Anxiety
Next Up: Editor's Pick