Iran's Zarif Says They Have 'Never Been Closer' to a Deal

Iranian Foreign Minister Mohammad Javad Zarif expressed optimism that a deal could be reached in talks between Iran and six world powers over the country’s nuclear program, he said in a YouTube video shot from the Palais Coburg where marathon negotiations have been taking place.

“At this eleventh hours, despite differences that remain, we have never been closer to a lasting outcome,” said Zarif in English. “Getting to yes requires the courage to compromise, the self confidence to be flexible, the maturity to be reasonable, the wisdom to set aside illusions and the audacity to break old habits.”

Though Zarif did not name his negotiating partners—the U.S., U.K., France, Germany, China and Russia—his choice of vocabulary was clearly aimed at the United States. With his use of the words “audacity” and later in the four-minute statement, “hope.” The title of President Obama’s second book was The Audacity of Hope.

Iranians are known for their careful and symbolic choice of language. Zarif ended his remarks with a quote from Kay Khosrow, a revered king and character in the Shahnameh, the Persian-speaking world’s national epic written around 1010 A.D. by nobleman Abol-Qasem Ferdowsi Tusi: “Be relentless in striving for the cause of good / Bring the spring, you must / Banish the winter, you should.”

Those lines were cited by Iranian President Hassan Rouhani in his first address to the U.N. General Assembly in September 2013 and again later tweeted by Rouhani as a reference to turning a page and remaking the dawn of a new era.

This is not the first time Zarif, who spent five years from 2002 in New York as Iran’s United Nations representative, has taken to YouTube to address the West directly in English. In November 2013, he defended Iran’s nuclear program on a similar YouTube video—replete with the same piano muzak opening and closing.

Interestingly, Zarif did not focus his remarks solely on the talks being held by the so-called P5+1, for the five permanent members of the UN Security Council plus Germany. He also mentioned the importance of building strong relationships to fight violent extremism, a clear reference to ISIS in Iraq and Syria. “Our common threat today is the growing menace of violent extremism and outright barbarism,” Zarif said.

The talks, which include Secretary of State John Kerry, were due to end on June 30, but were extended until July 7 to allow for more negotiations. Zarif’s remarks come as some perceived a hardening of Iran’s position given remarks by Iranian Supreme Leader Ayatollah Ali Khamenei last week demanding the end to bruising economic sanctions by the six world powers before Iran begin to dismantle its nuclear infrastructure. 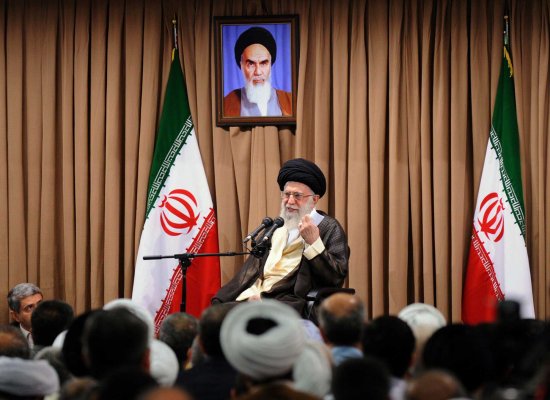 Why the Nuclear Experts Who Sent an Open Letter to Obama Are Really Talking to Iran
Next Up: Editor's Pick