Chinese Stock Markets Are in the Middle of an 'Unprecedented' Slide

A man walks past an electronic board showing the benchmark Shanghai and Shenzhen stock indices, on a pedestrian overpass at the Pudong financial district in Shanghai, China, June 26, 2015.
Aly Song—Reuters
By Nash Jenkins

In what analysts are describing as an unprecedented economic situation, China’s stock indexes are currently tumbling into a free fall, with panic taking the place of the brash confidence that, until last month, led these markets to rapidly develop into an unsustainable bubble.

That bubble appears to have now burst: by early afternoon local time on Friday, the Shanghai Composite Index had fallen 3.25% to an anemic 3,785.57 points; in the three weeks since it reached a seven-year high, it has lost 30% of its value.

Monetary authorities in Beijing are currently grasping for straws to remedy the situation, but numerous market interventions, including the fourth cut in interest rates since November, have failed to keep investors from frantically selling their Chinese stocks.

The turbulent situation is not yet catastrophic, but it illuminates the greater volatilities of China’s fraught existential dynamic: between an autocratic Communist government and the currents of free-market capitalism. In a country where stock investors now outnumber Communist Party members, if the market heals, it will likely heal itself. Beijing’s economic policies have thus far proven mostly ineffective.

Meanwhile, state authorities are attempting to blame the economic instability on calculated “foreign forces,” the Washington Post reports. State media outlets have alleged that Morgan Stanley or prominent investor George Soros may be purposely interfering in the Chinese markets. Messages making the rounds on WeChat, the country’s preeminent messaging service, allege that “‘international capital’ — or simply capitalism itself — [is] attacking China,” according to the Post.

In the face of this supposed malfeasance, prominent figures are encouraging their fellow countrymen to have faith in their faltering economy.

“Hold stocks with confidence,” was the advice of Fan Shaoxuan, a executive at microblogging service Sina Weibo, according to the Post. “Win glory for the country even if you lose the last penny.” 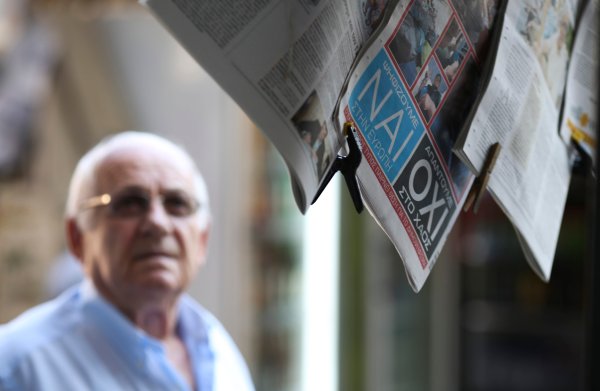 Everything to Know About Greece's Debt Vote
Next Up: Editor's Pick