Dr. Buzz Aldrin watches the Spacex Falcon 9 rocket launch on June 28, 2015 at the Kennedy Space Center in Florida.
Rob Varnas
Ideas
By Buzz Aldrin
Dr. Buzz Aldrin served as lunar module pilot for Apollo 11, the first manned lunar landing mission. He is the author of eight books, including his New York Times best selling autobiography Magnificent Desolation. His newest book, Mission to Mars: My Vision for Space Exploration, was published in 2013. As one of the leading space exploration advocates, Buzz continues to chart a course for future space travel. He is an unpaid advisory board member for XCOR Space Expeditions.

The recent failure of the commercial SpaceX Falcon 9 rocket is a near-term setback. But getting that vehicle back in the air means something more for the tomorrows to come. It means getting down to business concerning the future of America’s space program.

I was witness to the Falcon 9’s failed flight on June 28. Sitting there at the Kennedy Space Center in Florida, I had a front-row seat to the mishap. However disappointing is the loss of the SpaceX booster and destruction of the Dragon-carrying cargo ship headed for the International Space Station (ISS), it is a teachable moment. I think it punctuates the need for providing more appropriate budgetary funding for commercial space activities.

Why? I believe there’s a bigger picture here — one that transforms how we return to the Moon and implant boot prints on distant Mars.

U.S. President Barack Obama’s administration has helped shape the use of commercial space operators that provide to NASA cargo and crew services for reaching low Earth orbit. Furthermore, the groundwork has been laid for the next administration’s potential commitment to further encourage commercial space activities that can spur into reality America’s pathway to placing humans on Mars.

But first, there are essential things to remember about the booster business. Let’s not forget, it is rocket science! Everyone in the launch business has failures — everyone. SpaceX’s track record of achievement with the Falcon 9 — 18 consecutive successful flights prior to the mishap — has been notable. I have every confidence that it will learn from this failure and emerge as an even more reliable launch provider.

Prior to the years before my good friend John Glenn became the first American to orbit the Earth in 1962, that Atlas booster he sat on had a high failure rate. Since that time the Atlas has become the most reliable launch vehicle in the world.

If the recent SpaceX rocket trouble had been a failure of a government launch, we would dramatically increase funding to find the problem, fix the issue, and get back to flying. NASA’s commercial crew and cargo program is our only U.S. option to get astronauts and supplies to the ISS. It must be treated the same way. Shaving off dollars of the NASA budget on this type of activity is simply not an option if we want to have an American human spaceflight program. NASA’s purchasing of commercial crew and cargo space services are proving to be a dramatic cost-savings to the taxpayer compared to traditional programs.

That’s the here and now. This is what I envision in the years to come.

First of all, low Earth orbit can increasingly serve as an incubator for commercial activities. That could come in the form of private space stations, even the blossoming of public space tourism that can stretch all the way to my old stomping grounds — the Moon.

NASA should be commended for its push to nurture competitive services for launching crew and cargo into low Earth orbit. In fact, the SpaceX Falcon 9 and Dragon capsule are to be modified to ferry crews to the International Space Station. Likewise, NASA is working with Boeing on that company’s CST-100 crew capsule. One or both companies are expected to fly astronauts to and from the space station by the end of 2017.

There’s no doubt that Elon Musk and his SpaceX rocket program have their own, sky-high, business plan. But there are several trends worth watching that are sure to affect U.S. space activity for years to come. They include national budget austerity that leads to programmatic uncertainty. As counterpoint, there is also a maturing relationship between government and commercial space.

This last trend couldn’t be more epitomized by SpaceX and other space service providers, notably, Orbital Sciences and their Cygnus space supply craft. These American private spacecraft have been launched and docked to the ISS. Those historic berthings of automated supply ships offer powerful messages about innovation and private commerce in space, and exemplify the clout of NASA-funded U.S. competition to help plug up the country’s loss of capacity due to the retirement of the U.S. Space Shuttle.

Indeed, back in 2012, when the first SpaceX cargo vehicle docked with the space station, that event signaled the first delivery of logistics supplies to the International Space Station by a U.S. commercial space company. That first occasion, and others that followed, remind us that where the entrepreneurial interests of the private sector are aligned with NASA’s up-top mission to explore space, it creates a bottom line: America wins.

Falcon 9/Dragon flights to the ISS — and other commercial space launches that lie ahead — represent the dawn of a new era in space exploration. This type of progress indicates we have taken another step in demonstrating continued American leadership in space.

I am hopeful that SpaceX will identify its problem soon and get back in gear.

One of the payloads sitting in the wings — slated for the next cargo flight atop a Falcon 9 booster to the International Space Station — is the Bigelow Expandable Activity Module, or BEAM for short. That expandable space station module has been developed by the private firm, Bigelow Aerospace, under contract to NASA.

By using the International Space Station to test out inflatable structures, I see a “ballooning business” — be it for use in creating space exploration modules, establishing critical way-stations between the Earth and the Moon, using expandable structures on the lunar surface, or even using that technology as integral to setting up habitats on the Red Planet, Mars.

True, the ripple effects from SpaceX’s Falcon 9 booster going boom in the Florida skies are many. But the take-home message given the NASA-private sector bond is one of striving for reliability, safety, but also affordability.

Joining me in this view is my longtime friend, Norm Augustine, retired Chairman and CEO of Lockheed Martin. “Successes in commercial space transportation are not only important in their own right, they also free NASA to do that which it does best … namely, push the very frontiers of space and knowledge.”

So let’s press ahead beyond a failure to future successes. Cultivating new capabilities that drive down costs and further secure a private sector toehold in low Earth orbit is a clear window to see our space future.

Buzz Aldrin, best known for his Apollo 11 moonwalk, holds a doctoral degree in astronautics and continues to wield influence as an international advocate of space science and planetary exploration. Aldrin and co-author, Leonard David, wrote Mission to Mars – My Vision for Space Exploration, published in 2013 by the National Geographic Society. Aldrin’s new children’s book, Welcome to Mars: Making a Home on the Red Planet, co-authored with Marianne Dyson, is available in September. 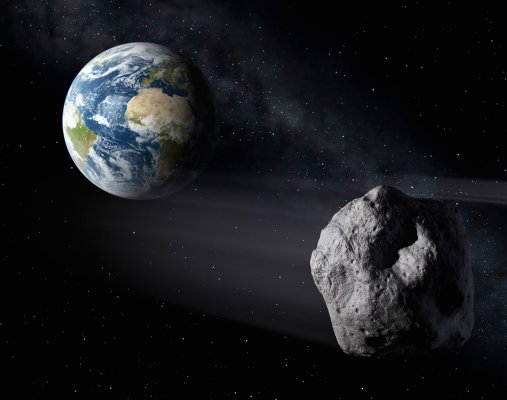 Watch Live Footage of Asteroid Flying By Earth
Next Up: Editor's Pick