A B-2 readies for flight at Whiteman Air Force Base, Mo. It's the only plane capable of dropping the Massive Ordnance Penetrator.
Bennie J. Davis—US Air Force/Getty Images
By Mark Thompson

U.S. and Iranian negotiators have been scrambling in Vienna to concoct an accord that will stay Tehran’s nuclear ambitions for at least a decade. Meanwhile, the Pentagon has spent the same amount of time plotting how to derail such an effort if it can’t be done at the negotiating table.

The U.S. has made it clear that it will not allow Iran to develop a nuclear weapon to threaten Israel or its other neighbors in and around the Persian Gulf. If the atomic talks break down—and U.S. intelligence decides Iran is on the verge of becoming a nuclear-armed state—look for the Air Force’s Massive Ordnance Penetrator to get the assignment to try to destroy that capability.

Of course, the Obama Administration and its five negotiating allies—Britain, China, France, Germany and Russia—are engaged as much in psychological gamesmanship as potential pyrotechnics. The U.S. has leaked just enough information about the MOP to let the Iranians know that the Americans believe its use could set back Iranian efforts to develop a nuclear weapon for years.

But the nation’s military leaders have made clear that a single strike with one or (more likely) more Massive Ordnance Penetrators may not halt Iran’s nuclear ambitions. “Obviously anything like that can be reconstituted,” Defense Secretary Ashton Carter said July 1. “And so a military strike of that kind is a setback, but it doesn’t prevent the reconstitution over time.” It’s a hammer that might have to be used repeatedly if Iran refuses to back down and continues to work on its nuclear program. “The military option isn’t use once and set aside,” Army General Martin Dempsey, chairman of the Joint Chiefs of Staff, added. “It remains in place.”

While no one will say so, Iran’s nuclear facility at Fordow–buried up to 80 meters beneath a mountain near the Shiite holy city of Qom, at a former missile base controlled by Iran’s unpredictable Revolutionary Guards–is at the top of that target list. Iran has been conducting much of its suspected nuclear-weapons work for years in underground labs and research facilities thought to be able to survive attacks by earlier generations of U.S. military bunker-busters.

“In October 2014, the Air Force successfully completed one weapon drop from the B-2 aircraft on a representative target,” the Pentagon’s top weapons-tester reported earlier this year. “The test, conducted at the White Sands Missile Range, New Mexico, demonstrated weapon behavior after planned enhancements were incorporated.” Several additional tests have been carried out in recent months, Pentagon officials say.

Nearly a decade ago, the Pentagon concluded that dropping its one-ton bombs on buried targets was like using a peashooter against an elephant. “Our past test experience has shown that 2,000-pound penetrators carrying 500 pounds of high explosive are relatively ineffective against tunnels, even when skipped directly into the tunnel entrance,” a 2004 report said. “Instead, several thousand pounds of high explosives coupled to the tunnel are needed to blow down blast doors and propagate a lethal air blast throughout a typical tunnel complex.”

In late 2009, the Air Force quietly circulated a solicitation seeking a “Quick Reaction Capability” to “defeat a specific set of Hard and/or Deeply Buried Targets.” The weapon, the service said, would “maximize effects against Hard and/or Deeply Buried Targets (HDBTs), while minimizing time over target.” The Air Force said it needed the weapon to meet “Urgent Operational Needs requirements”—generally a plea from a battlefield commander who doesn’t think he has the weapons he needs to accomplish a mission assigned to him.

The Massive Ordnance Penetrator hits its target during a test at White Sands.
DoD

“The system will hold at risk those highest priority assets essential to the enemy’s war-fighting ability, which are heavily defended and protected,” the Air Force elaborated in February 2011 budget documents, “providing a critical global strike capability not currently met by inventory conventional weapons.”

The $15 million MOP has six times the heft of existing GBU-28 bunker busters. Glided into its destination by GPS-guided lattice-type fins, its alloy steel hull – some 80% of its weight – is designed to remain intact as it drills through rock or reinforced concrete before setting off its 5,300-pound warhead. Air Force officials say it represents a “bridge” capability between existing bunker busters and nuclear weapons themselves.

The Pentagon doesn’t have an unlimited supply of MOPs: it initially bought 20, for $314 million. The Boeing-built weapon can only be carried by the Air Force’s B-2 stealth bomber. It’s also extremely shy: there are few photographs of the real thing. But the Air Force has released a pair of photographs of a MOP mockup. It’s a safe bet the mockup has been tweaked from the actual weapon to avoid betraying its precise design and dimensions.

After several upgrades, the Air Force has let it been known that there’s an operational stockpile of the world’s most powerful non-nuclear bombs at Whiteman Air Force Base, Missouri. They’re not far from the B-2 bombers, ready to carry them 7,000 miles to Iran. That much is certain. Whether Obama thinks dropping them is worth the risk isn’t. 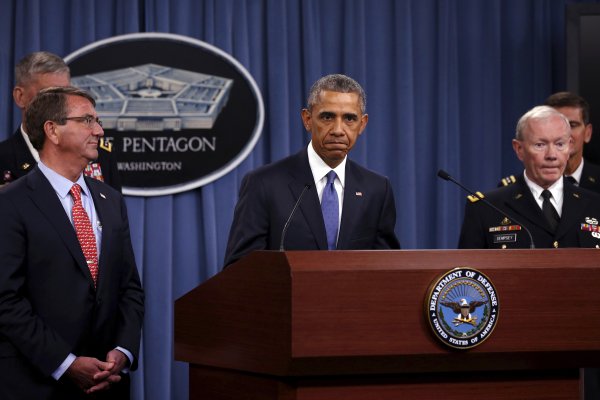