Lance Armstrong during stage twelve of the 2010 Tour de France from Rodez to Revel on July 17, 2010 in Revel, France.
Bryn Lennon—2010 Getty Images
By Tara John

Disgraced cyclist Lance Armstrong is this month heading back to the scene of some of his most celebrated, and infamous, victories—the route of the Tour de France—and he has a retired English soccer player to thank. Armstrong will cycle stages 13 and 14 a day ahead of the professional peloton at the Tour de France in mid-July. He will be joining former soccer player Geoff Thomas’s 21-day charity ride, One Day Ahead.

Despite the controversy Armstrong’s involvement has caused—the president of the world’s cycling body International Cycling Union’s (UCI), Brian Cookson, has called it disrespectful—Thomas thinks it has made the world take notice of his fundraising race, which will benefit a leukemia charity.

“It is all about publicity and about raising funds,” says Thomas, who formerly captained the English soccer team, Crystal Palace. “I knew I opened a can of worms by doing this.”

Armstrong has acknowledged he foresaw trouble. Thomas “and everybody involved caught a ton of grief. We knew there would be criticism,” Armstrong told the Telegraph last month. The cyclist famously won the Tour seven times before being stripped of his titles for using performance-enhancing drugs.

On July 3, Thomas and his team of 12 cyclists, who have raised close to $1 million, will start the first stage in Utrecht, in The Netherlands, one day ahead of the professionals. Armstrong will join them two weeks later in France on July 17.

While there might be some who would like to see Armstrong attack a mountain again, as he used to do with such eyebrow-raising success, Thomas was careful to not put Armstrong on any iconic climbs, where fans tend to line up days before the event. “We don’t want to show disrespect to the Tour itself and he [Armstrong] doesn’t want to do that either.”

Thomas says that what convinced Armstrong to join One Day Ahead was the opportunity to work with the cancer community again, something he missed since leaving the foundation he started, Livestrong. “All he wants to do now is get back on that track where he can just be an influence in the cancer community,” says Thomas.

Armstrong’s book It’s Not About The Bike: My Journey Back to Life, detailing the cyclist’s struggle with testicular cancer, pushed Thomas onto the road to recovery after the soccer player was diagnosed with a form of blood cancer in 2003. When he went into remission in 2005, Thomas cycled the full 2,200 mile-long route two days ahead of Armstrong, who was competing in the Tour de France that year.

Despite both being professional athletes who battled cancer and started their own charities, the parallels end there. “I am a sportsman. And what he did as a sportsman I don’t agree with,” says Thomas. “I think he was a great sportsman…but the sad truth is the culture of cycling then and for a long time during his career was tainted by the doping scandals. And he played a part in that.”

For Thomas, Armstrong’s reconciliation with Emma O’Reilly, the Dublin-born massage therapist whom Armstrong sued for slander when she attempted to talk about his doping, signals a change in a person who was known back in 2000 for being, according to Thomas, a “nasty guy.”

“I thought if she can forgive him, then other people have as well and there is probably a few that never will,” Thomas tells TIME. “I separate the sportsperson and the person himself… what I see is a guy who survived cancer himself, inspired millions and raised over $500 million for his foundation.”

Thomas, who has been fundraising assiduously over the last 10 years, hopes One Day Ahead will have a positive impact for his charity, Cure Leukemia. But it may come at a cost: giving Armstrong a chance to revisit the route where he cheated his way to victory might leave some spectators with a sour taste. 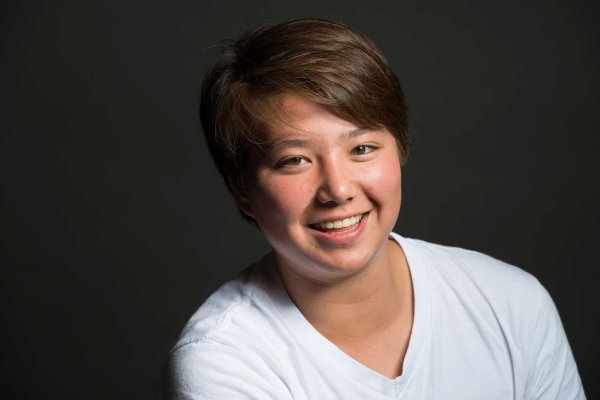 Meet the First Openly Transgender Swimmer to Compete in the NCAA
Next Up: Editor's Pick