Why Millennials Can't Afford to Be Colorblind

People gather to protest the confederate flag which flies in front of the South Carolina Statehouse in Columbia, SC on June 20, 2015. The protest comes after the racially motivated killings of nine people at the Emanuel AME Church in Charleston, SC.
Andrew Renneisen—The Washington Post/Getty Images
Ideas
By Victor Luckerson
Luckerson is a journalist in Tulsa who is writing a book about the city's Greenwood district, and a biweekly newsletter about neglected black history called Run It Back

Because we have been taught to believe in happy endings, it’s easy for young people to view racism as a problem that will inevitably be solved, or perhaps already has been. In the history books, racial progress for African Americans occurs on a comforting positive slope, evolving from slavery to Jim Crow discrimination to the post-Civil Rights era of equality under the law. And in our own lifetimes, we reached a new racial milestone when Barack Obama became the United States’ first black president, thanks in a large part to a groundswell of support from young voters of all races who were optimistic about the future.

What the history books miss is that change rarely happens in orderly progression. There are fits and starts. There are retrenchments. There are debates. Change occurs not only on the macro level, in soaring proclamations by presidents and civic leaders, but also on the micro level, through a shift in the thinking of everyday people. And big racial progress is always met with a measure of resistance–some of it passive, some of it active, some of it horrifically violent. That is what we are experiencing right now in America. That is what happened in Charleston, S.C. last month. And it isn’t going to stop just because an older generation passes away.

Dylann Roof, the man charged with murdering nine black people after being welcomed into their church service, was only 21. He was a Millennial, and while his actions don’t reflect the feelings in the hearts of most young people, it’s now our collective responsibility to address head-on the problems in our society that allow such hate to flourish.

Millennials claim to be racially progressive but are often ill-equipped to have frank discussions about race. In a 2014 survey by MTV, 91% of young people between the ages of 18 and 24 said they believed in racial equality, and 72% said their generation believes more in equality than older Americans. Many of these young people see “colorblindness” as valuable measure of racial progress, with 68% saying that focusing on race “prevents society from becoming colorblind.” But only 37% of respondents were raised in households that talked about race, and just 20% of those surveyed said they felt comfortable talking about biases against specific groups.

This is the crux of the problem. Many young people take “not seeing race” as badge of honor that proves their progressivism and absolves them from engaging in discussions on the topic. Colorblindness allows you to escape the racial rancor that is playing out in our streets, on social media and now even in our churches.

But America is still a country riddled with systemic racial inequalities, and many are are becoming more pronounced, not less. Whites are now 13 times wealthier than blacks, the largest gap since 1989. Blacks are 2.5 times more likely than whites to be arrested for drug possession, even though about the same percentage of blacks and whites use drugs. Despite the promise of equal education enshrined by Brown v. Board 60 years ago, more than a third of black students in the South now attend schools that are almost fully minority and are often doubly segregated by poverty. Their issues are literally invisible to many of their mostly white peers who would never see these schools.

It’s not enough to assume that these problems will disappear when younger, more open minds rise to power. A recent survey by NORC at University of Chicago showed that 31% of white Millennials surveyed rated blacks lazier the whites, just one percentage point less than Gen X’ers and 4 points less than Baby Boomers. Twenty-three percent of white Millennials surveyed rated blacks less intelligent than whites, compared to 19 % of Gen X’ers. At the same time, even in 2015, the never-ending litany of racist incidents at college campuses continues, from the vulgar chant on the fraternity bus at the University of Oklahoma to the students who hung a noose on the statue of the University of Mississippi’s first black enrollee. More evidence that even among the most well-educated young people, individual racial cruelty is far too common.

There’s no one solution to these problems—but they are problems all of today’s young Americans will have to work to solve in the years ahead. As of 2014, most children under 5 in the United States are non-white. By 2043, most Americans will be. There are obvious financial and political dangers for people who ignore these demographic shifts, like presidential candidate/entrepreneur/television personality Donald Trump. He stands to lose millions of dollars worth of deals and sponsorships for calling Mexicans “rapists,” even as he draws large crowds. But there’s a collective cost as well. A world where all minorities are not granted the same opportunities and protections as white people–while attending school, while interacting with police, while praying at church–will be a world of even higher incarceration rates, health care expenses and education inequality than the one we live in today. These are economic costs, in addition to the more obvious moral ones, that will ultimately burden everyone.

It’s possible that the racial strife of the past year will change young people’s views on America’s racial challenges in a very permanent way. The Confederate flag, which Roof adopted as his own, is suddenly being removed from major retailers and sporting events, and South Carolina’s senate passed a bill to remove the flag from statehouse grounds on Monday.

Even before the Charleston shooting, a group of high schoolers I interviewed for a feature about teenage life in 2015 already seemed to have been made more racially conscious by protests in Ferguson, New York and elsewhere. “Within these last few years, you’re definitely seeing that there’s some stuff that’s still lingering, especially with the justice system,” said Lonnie Hancock, a 16-year-old at East Side Community High School in Manhattan. “Before I was kind of aloof to it. Now I feel like it kind of is more in your face that things aren’t exactly OK.” 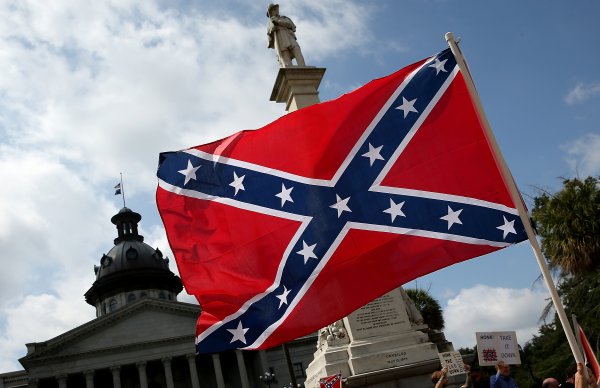