On Tuesday, Nathan Collier went to the Yellowstone County Courthouse in his hometown of Billings, Montana, to register to get married to his partner Christine. The problem? Collier has been married to wife Victoria since 2000. And under Montana law, bigamy is outlawed except for faith reasons; Collier is not marrying Christine and Victoria due to his religious beliefs, making his marriage license illegal under bigamy laws.

“Everyday, we have to break the law to exist as a family,” Collier said in an interview with TIME. “We’re tired of it.”

The Montana trio argue that under Friday’s landmark Supreme Court decision recognizing same-sex marriage across the country as legal, their polygamous relationship should be legally recognized and guaranteed the same rights as heterosexual and homosexual marriages. “If you read the justice’s statement, it applies to polygamists,” Collier said.

He’s referring to the dissent by Chief Justice John Roberts, who argued that the reasoning for giving same-sex couples the right to marry “would apply with equal force to the claim of a fundamental right to plural marriage.”

Spurred by Roberts’ words, the three decided to go to the courthouse Tuesday armed with the Supreme Court ruling. County clerks initially denied to give a marriage license upon learning that Collier’s marriage with Victoria had not been dissolved. But the clerk returned afterwards, saying that they would refer to the county attorney’s office before making a decision. The county’s chief civil litigator is looking to have a formal response by early next week:

The way Collier, Victoria, and Christine were treated at the courthouse made the family feel “violated,” Collier said. “We feel entitled for a legal legitimacy and for [the Yellowstone County Courthouse] to deny this is a violation of our civil rights … We feel the marriage equality law applies to us.”

Collier says that all his family seeks to do is be legally recognized and not live in fear anymore. If that means that he can bring polygamous relationships to the national conversation, Collier says he’d be willing to be arrested or sue the state if his license gets denied. “Ours is a happy, functional, loving family,” he said. “I’m not trying to redefine marriage. I’m not forcing anyone to believe in polygamy. We’re only defining marriage for us. We just want legitimacy.” 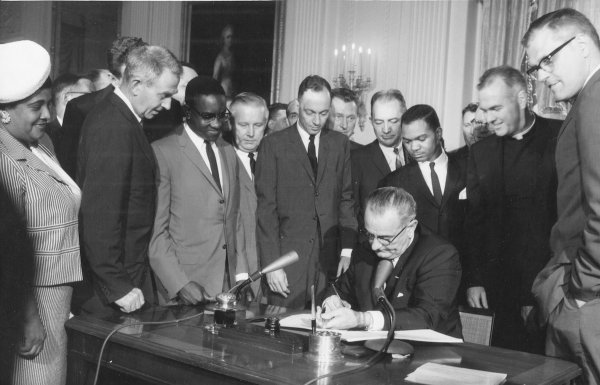 The Meaning Behind the Civil Rights Act's Signing Date
Next Up: Editor's Pick