The name wasn’t supposed to stick. It originated from a joke—Left Brain, a member of the hip-hop collective Odd Future, got so tired of answering the question “Where are you from?” that he said he was going to start answering, “From the Internet.” He figured the band would swap it out for something better when they thought of it. But they never did.

But it turns out to be a fitting name for the soul band formed by Syd tha Kid and Matt Martians, two producers who met on the Internet back in the MySpace days, released their first EP for free online and whose third album, Ego Death, released this week on Odd Future Records, is a call for an end to the zeroes-and-ones-fueled narcissism that characterizes the Internet age. As Martians explains, “For our generation, a lot of ego is based on follower counts or likes or retweets.”

Yet “ego” is far from the first word that comes to mind upon meeting Syd and Martians, who, on a recent summer afternoon at New York City’s Ace Hotel, are swaddled in sweatpants. Syd apologizes for being enshrouded in her hoodie—the AC is blasting—then Martians, who is also an illustrator, apologizes for doodling while we chat (“I answer way better when I’m drawing,” he says).

Ego Death plays like a Sunday afternoon holed up in the bedroom, the melodies a soothing blanket to crawl under. Syd’s voice is a handshake between sensuality and swagger—melting incantations of love and lust when she sings of “cigarettes and sex on your breath” and indifferent bravado when she fantasizes a getaway scene: “kilos in the back seat, million in the briefcase.” Luscious jazz guitar flows buoyantly beneath. Though the album is billed as soul, its sound defies easy categorization.

It’s also an impressive showing for a singer who never intended to sing. Growing up Sydney Bennett in Los Angeles (her stage name was a childhood nickname bestowed by her brother), Syd, now 23, built a studio in her parents’ guesthouse when she was 14. “When I started making music, I just wanted to be the producer who sang the hooks,” she says. “I wanted to be Pharrell, honestly, the one who made the beats and was in the music video with the girls.”

After meeting on MySpace, Syd and Martians (real name Matthew Martin), 26, a self-taught producer who also plays keys, soon became roommates, their living room a studio they could stumble into from their bedrooms every morning. When Syd talks about what drew her to Martians’ music, she slips into producer-speak: “Everybody else, they have the synth chords with the one lead and the dub drums, but he would have dub drums and then one sound that comes out of nowhere, and I was like, ‘Wow, I wonder how he makes that.’”

Martians and Syd—who still put out albums on the Odd Future label, though the group has largely disbanded to pursue separate endeavors—originally intended to make their beats, write their songs and then hand them off to other artists to sing. But when they couldn’t find the right people, Syd tried singing them herself—and her voice is so achingly natural it sounds almost like breathing.

Most of the songs on Ego Death are about love and lust, and the fact that Syd’s singing to women on these tracks is refreshingly unremarkable. She speaks with a mix of frustration and humility of the press she’s gotten for being an out gay artist. When a profile turned out to be focused entirely on her sexual orientation instead of the band’s first album, she says, “I was like, damn, that was not supposed to be about that.” She says it’s flattering when people see her as a gay icon in the music industry, but it’s not her defining identity. “I’m totally supportive of the movement, obviously,” she says. “But I want people to love me for my music.”

Amid the love and lust on Ego Death is one track, “Penthouse Cloud,” that wedges itself more deeply than the rest into the conscience. In it, Syd sings, “Did you see the news last night? They shot another one down/ Does it even matter why? Or is it all for nothing?” Her syrupy falsetto floats high above the ground, dejected and singed with pain. The chorus is a challenge to a higher power: “Father, who art in heaven, is this how you saw it when you made your creation? Is this what you wanted?”

Syd wrote the song the morning after the Michael Brown verdict was announced. It wasn’t meant to be religious—Martians says both he and Syd “follow the moral basis of religion” without being particularly religious themselves. Neither is it meant as a political protest song. If anything, it’s philosophical.

“It’s almost like a big why,” Martians says, questioning not only why so many black men have been killed by police, but also, he says, “starvation, tsunamis. Just a big question, man, why?” Syd finishes the thought: “If everything happens for a reason, what’s the reason?”

They both shrug. They don’t have the answers. And they won’t pretend to, either—they’ve long since checked their egos at the door. 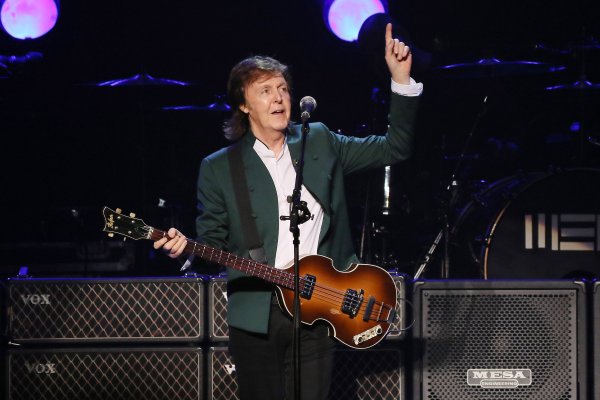 Paul McCartney: John Lennon Was 'Martyred,' His Reputation is 'Revisionism'
Next Up: Editor's Pick