Christopher Lloyd and Michael J. Fox star in Back to the Future
Universal
By Eliza Berman

On July 3, 1985, Michael J. Fox skateboarded into the American imagination as Marty McFly, the guitar-shredding teenage hero of Back to the Future. The trilogy, released over the course of five actual years but time-traveling back and forth across three centuries, has aged relatively well in the ensuing years. It’s now remembered not only as a feel-good family romp through the space-time continuum but also as a reflection of American fears and values in the mid-1980s.

The films’ complex narratives were clever enough to require occasional mental somersaults to track, but they also left fans with questions. How does Marty’s girlfriend, Jennifer, magically morph, between the first and second installment, from having Claudia Wells’ body to having Elisabeth Shue’s? How could Marty’s parents not have recognized their teenage son as the mysterious, hunky Calvin Klein who so memorably influenced their young lives?

Thankfully, there are as many amateur conspiracy theorists as there are questions about Back to the Future. And now that we know director Robert Zemeckis has no plans to reboot the franchise, their speculation is truly all we’ve got. Here, in honor of the time machine’s 30th birthday, are some of the best theories that attempt to connect the three movies’ unconnected dots.

George McFly knew Calvin Klein was his son. Many viewers have questioned why, if the time-traveling Marty (who introduced himself as Calvin Klein) played such a pivotal role in his parents’ revised origin story, George and Lorraine don’t think it’s strange that their son is his spitting image. But so many fans believe that George did recognize his son that there is a lengthy thread on Reddit, called “George McFly Knew,” dedicated to proving it.

The theory suggests that George, more than Lorraine or Biff, would have been open to the possibility of time travel because he was a major sci-fi fan. Marty left a trail of anachronistic breadcrumbs—playing “Johnny B. Goode,” mentioning Vulcan from Star Trek and ordering a Pepsi Free—that George might have been able to gradually recognize throughout the years. George would have had an incentive to keep the knowledge to himself because he didn’t want to interfere with his son’s efforts to ensure he married the girl of his dreams. It’s even suggested that the book George publishes at the end of the first movie is based on his son’s secret time travel.

Doc Brown was attempting to commit suicide the first time he tested the time machine. Early in the first movie, when Doc Brown asks Marty to film his first attempt at using the DeLorean as a time machine, Doc has just finished talking about how many of his inventions have failed to work. He admits that he’s never tested the machine before, yet he puts his beloved dog Einstein in the passenger seat and stands, next to Marty, directly in the path of the speeding vehicle.

Some theorists posit that Doc was ready to give it all up—his own life and those of his closest friends—if his most important invention failed to take off. He also knows that the villains casually referred to as “the Libyans” are after him for plutonium, and his fate may as well be sealed already. Other theorists point to additional markers of Doc’s compromised mental state, including the morbid possibility that when he said he cut his head attempting to hang a clock in the bathroom, he had actually been trying to hang himself.

Marty McFly actually dies in Back to the Future II, but Doc Brown travels back in time to save him. The theory here goes that Doc accidentally altered the space-time continuum, facilitating an alternate future in which Marty is killed in the tunnel while attempting to steal the sports almanac from Biff. Learning of these fateful consequences, Doc gets there just in time to throw Marty a line to save him from colliding with Biff’s car. How else would Doc have known to show up at the exact right place and time if not for some future revelation?

The trilogy is a metaphor for sexual reproduction. There is very little rhyme or reason as to why Robert Zemeckis and Bob Gale, who wrote the screenplays, would make a movie that served as a metaphor for reproduction. But many fans have noticed that, even if only coincidentally, the entire narrative has much in common with a birth narrative. The flux capacitor looks not entirely unlike a pair of ovaries and fallopian tubes connected to a uterus. The time machine requires that a man (or a dog) enter it in order to begin the process. And the events cooked up throughout the course of time travel yield—or birth—different versions of people in the future. To cap this one off, the process is supervised by a doctor, Doc Brown.

Jennifer looks different in the second and third installments because Marty accidentally made a minor change to her parents’ futures when he went back in time. When Marty travels back to 1955 and starts interfering with the chain of events that led his parents to fall in love, he sees his siblings and himself beginning to disappear from a family photo. It’s explained that if George and Lorraine never fall in love and get married, then the McFly children will disappear from the future. Fans have applied the same logic to the significant metamorphosis Jennifer undergoes between the first and second movies. In reality, we know the role was recast from Claudia Wells to Elisabeth Shue because Wells, whose mother had fallen ill, declined to reprise the role.

But fans of the trilogy attempting to fit the change squarely within the film’s narrative found a clean way to do so: by suggesting that something Marty did in 1955 interfered with the lives of Jennifer’s parents enough to change Jennifer’s physical appearance. Rather than acknowledging the recasting in the movie, however, the second movie merely starts with a replay of the final scenes of the first, reshot with Shue as Jennifer. 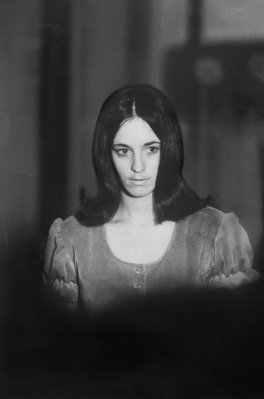