Cartel Land Documents Vigilantes North and South of the Border

When director Matthew Heineman set out to make Cartel Land, he thought he was telling a classic Western tale: a “simple hero/villain story of guys in white shirts fighting against guys in black hats,” he says. But very quickly, he saw that the folks combatting powerful drug cartels on both sides of the Mexican border were not the clear-cut good guys they seemed.

Cartel Land, in theaters Friday, documents two groups: the Autodefensas, a Mexican force to combat violence by the Knights Templar cartel, and a group of unofficial border patrollers in Arizona who try to keep cartel operatives from crossing into the States. While both work to fill roles they felt their respective governments had neglected, their efforts aren’t immune to their own corruption.

Heineman landed himself in some hairy situations tagging along with his subjects, including witnessing (and filming) shoot-outs. “It was scary being in those situations,” he says, “but I actually found that focusing on the craft of filmmaking—focusing, exposing—sort of calmed me down in those really intense moments.”

Witnessing these life and death situations made him ask himself what he would do if violence came to his own doorstep. “What would I do if my sister was raped or my brother was left hanging from a bridge? Would I take up arms? Would I fight violence with violence? Is that just?”

Ultimately, the film doesn’t paint vigilantism as a viable answer to the war on drugs; even despite “noble intentions” among the leaders of the groups he followed, Heineman says, “on both sides of the border we see people within the ranks who might have ulterior motives.” That flaw, he says, “is one of the things that inherently makes vigilantism unsustainable.” 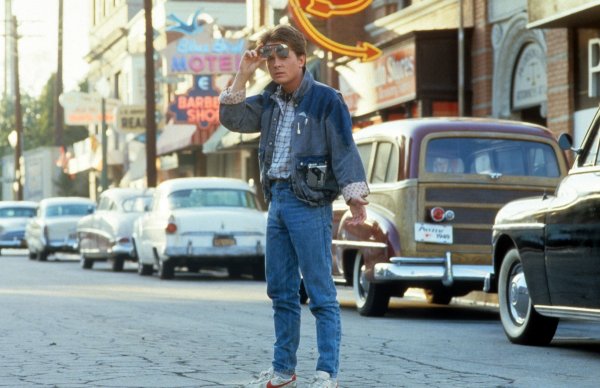 Read TIME's Prescient Review of 'Back to the Future'
Next Up: Editor's Pick