The two make an easy pair, with Christie having made a number of trips and steering more than $2 million as chairman of the Republican Governors Association to boost LePage’s re-election candidacy last year. They share a similar temperament, with both known for high-profile flare-ups in front of television cameras. Just last week, LePage joked about shooting a newspaper cartoonist who has been critical of him.

“He’s a little bit shy,” LePage quipped about Christie as he delivered his endorsement. “I’m going to work over the next year, to bring him out of his shell.”

“He’s not gonna be a politician and talk out of both sides of his mouth,” LePage told a gaggle of about 30 journalists after greeting and posing for photos with diners eating short-stacks and sipping coffee . “What he’s gonna do is tell you things you may not want to hear but you need to hear, and then he’s gonna go to work to fix them.”

Christie thanked LePage for the endorsement. “I think that says a lot about our candidacy, and quite frankly, it says more about Paul LePage,” he said. “This is a guy who knows how to make decisions.”

“He’s a great friend and he’s going to be an important part of this campaign as we move forward,” he continued.

The hastily arranged event less than 24 hours after his presidential announcement took Christie on a detour from his five-day swing to New Hampshire, where he is devoting his all, to neighboring Maine, whose caucuses proved inconclusive amid a bitter intra-party squabble in 2012.

Speaking to reporters, Christie condemned clerks and other government officials in several southern states who have refused to issue same-sex marriage licenses after last week’s Supreme Court ruling, pointing to his own experience in New Jersey after his state Supreme Court ordered it legalized two years ago.

Christie said he was not concerned that some presidential candidates will be excluded from the stage at the first two presidential primary debates beginning next month, saying he believes he will make the cut, even as he is in danger of falling from the top 10 in several surveys.

“My view is, I intend to be on the debate stage and I intend to speak my mind and I’m sure that that will go well for us,” he said. “And we’ll see what everyone else does. But in the end, it’s up to the party and the debate sponsors.” 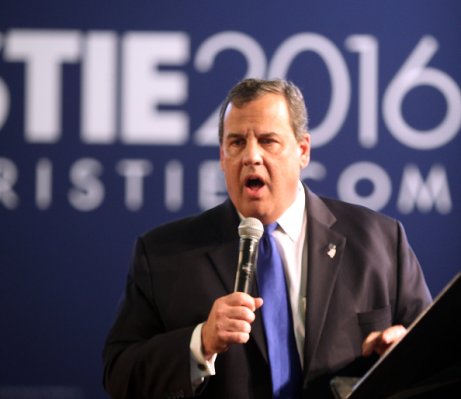