June marked a string of historic changes nearly unprecedented in minority communities in the U.S. The Supreme Court ruled that same-sex marriage was legal, resulting in more than 26 million Facebook users changing their profile pictures, the White House lighting up in rainbow colors, and many around the country excitedly saying “I do” for the first time. Meanwhile, after a shooting in Charleston, S.C., a raging debate over whether or not the Confederate flag should be taken down continues amid violence and protests.

Right there for the taking, it seemed, was a beautiful, poignant comparison—one that Mother Jones called “iconic.” A cartoon in five panels, side-by-side, shows a Confederate flag lowered as a rainbow flag is raised. On the surface, the image appears to capture the intense battles oppressed groups have overcome in recent days, marking a celebratory victory for all. In reality, that is far from the case.

By making one snapshot of two very different battles, we are implying a correlation that does not exist, and, further, we are assuming a victory of race where there is none. The URL for the Mother Jones piece—”the-gays-won-the-civil-war” —instead of being cutesy and funny is a travesty. It’s an act of ignorant privilege that this joke can even exist. Those who have not had to live through this, those whose ancestors never experienced the institution of slavery, are glibly conflated one cause with another.

Don’t forget: The Confederate flag still flies over South Carolina’s statehouse. And a black woman was jailed for physically climbing the pole and taking it down. While it is an incredible victory that Confederate flag merchandise is being stripped from store shelves, and some people are choosing to cover up their Confederate tattoos, we must not forget that the cause for such action was the brutal killing of nine black Americans who were studying the Bible.

A human-rights win for the LGBT community based on a court ruling cannot be compared to a tremor of anti-racist solidarity stemming from a mass murder. Let us not forget the black churches still burning in the South, a clear indicator that this rift has not magically healed itself, and racism is not suddenly over.

These two issues cannot be placed side by side because they share very little common ground other than the most superficial tenets of the notion of justice. In showing the replacement of a flag that still flies over South Carolina, we are, perhaps accidentally, erasing a painful piece of black history, co-opting it in the name of peace and justice. We cannot pave over the still-bleeding wounds of those in the trenches of one war because we want a nice, tidy, social-justice box of peace.

It also dangerously allows viewers to ingest that image and subconsciously assume the work has been done, and the fight has been won. To rewrite current events in this way will only make it harder for activists fighting against racism.

Symbolism is an important guide for cultural thought, and false comparisons are dangerous in any venue. It’s possible to celebrate a victory for one marginalized group without trampling all over another. Being sensitive to the plight of one group of people amid the joyous, rightful, and hard-won victory of another allows us to be better allies to both. 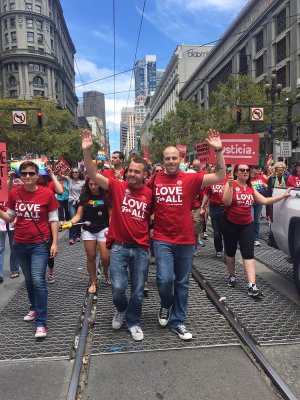 Gay Marriage Plaintiff: What It Was Like to Fight For—And Win—Same-Sex Marriage Equality
Next Up: Editor's Pick