A Wisconsin teenager who is accused in the double murder of her mother and stepfather entered insanity pleas Monday.

Ashlee Martinson, 17, is charged with two counts of first-degree intentional homicide and three counts of false imprisonment in the fatal stabbing of 40-year-old Jennifer Ayers and the shooting death of 37-year-old Thomas Ayers. The horror blogger, who documented her dark obsession with death under the name Vampchick, is also accused of locking her three sisters, between the ages of 9 and 2, in a room before fleeing to Boone County, Indiana.

Martinson pleaded not guilty by reason of mental disease or defect during a brief appearance in Oneida County Circuit Court, WFXS reports. A hearing date is set for Sept. 28.

The March 8 killings at her family’s Rhinelander home allegedly occurred the same day the teen got into a heated argument with her stepfather over her relationship with her 22-year-old boyfriend. Police say Martinson shot her stepfather in the head first and then stabbed her mother to death. Police found a rifle in the kitchen and a bloody folding knife on the counter next to the bathroom sink, according to the Stevens Point Journal.

According to a search warrant filed in the case, police also looked at the teen’s blog and found one entry, titled “Unworthy,” which depicted a scene in a cabin in the woods where the main character had tied a person to a table. The character then tortures, mutilates and ultimately kills the victim, according to the warrant, the Stevens Point Journal reported.

Police say Martinson fled to Indiana after the murders and was captured the next day with her boyfriend, Ryan Sisco. Sisco, who was not involved in the killings, told police her parents advised him over Facebook to keep away from the teen because she was a minor, the paper reported. 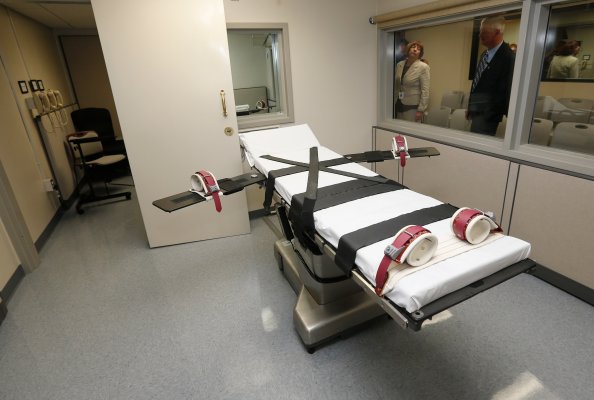 Search for Execution Drugs Continues
Next Up: Editor's Pick