For Chris Christie, the gymnasium will be a familiar setting. Livingston High School is where he watched classmates play basketball and cheer the football team before big games, cheering on the powerhouse Lancers. He rose over his contemporaries—including the man who now serves as President Obama’s top economic adviser, as well as a former baseball teammate whose role in closing a bridge into New York City would dog Christie’s political future—to become a three-time student body president.

On these polished hardwood floors, trimmed in green paint, the New Jersey Governor will try to return to the rosier times, when ahead of him lay years as the Big Man on Campus at Delaware and then a high-profile posting as a young U.S. Attorney. As Christie launches his White House bid on Tuesday, his approach echoes the craggy vocals of his musical hero, a beloved figure in the Garden State with whom the politically ambitious Christie has had a tortured relationship.

“Glory days,” Bruce Springsteen bellows on the eponymous track, released while Christie in his young 20s. “Well, they’ll pass you by, glory days.”

It’s as fine a metaphor as any for the famously outspoken governor, who has descended from far-and-away front-runner to potential also-ran in a matter of 18 months.

Burdened by the lingering scandal of the politically motivated closure of approach lanes to the George Washington Bridge by former aides, including his longtime pal and fellow Livingston High School alumnus David Wildstein. The state’s fiscal malaise has taken its toll; the wonk a year ahead of Christie, White House Council of Economic Advisers Chairman Alan Krueger has faced it on the national level. And Christie’s challenge to his state’s public sector unions on pensions and benefits, deemed too modest, have sent him into a six-month scramble for a fix as he has tried to lay the groundwork for the most difficult campaign in American politics.

His national poll numbers have collapsed, from a high of 20 percent in the RealClearPolitics average just before the Bridgegate revelations in early 2014 to 4 percent today. Even the announcement date reflected Christie’s newfound troubles—pushed forward to allow him to fight to earn a spot on the first debate stage in Cleveland on Aug. 6. Even at home, his poll numbers put him among the most unpopular governors in the country.

Christie aides maintain that despite the low approval figures, his overall strategy hasn’t substantially changed. But it’s clear his ambition has. Gone are the long-laid plans to run a national campaign as a well-funded establishment powerhouse. His fundraising numbers, which will be announced next month, are expected to pale in comparison to Wisconsin Gov. Scott Walker and Sen. Ted Cruz, let alone former Florida Gov. Jeb Bush. Some of the mega-donors who pushed him to enter the 2012 race against Mitt Romney have moved on, while others have opened their checkbooks only for cautious sums.

What Christie has left are his glory days: the personal narrative of growing up in a blue-collar family to prosecuting terror cases that will serve at the core of his speech. More important, will be recapturing the spirit of the long days of 2011, when the relative-unknown Governor became a YouTube and cable news staple in weekly clashes with critics over his pension reform plan. The give-and-take, in which Christie would argue that the state would go broke unless the retirement programs were restructured, defined Christie’s tenure in Trenton and, he hopes, one day the White House.

It’s an all-in bet that Christie’s dynamism on the stump and raw political talents can overcome more than a year of drama-filled headlines. That New Hampshire, the state with a penchant for embracing candidates’ “straight talk,” could vault Christie back into the top-tier. That the rest of the field, filled with candidates calibrating their messages to appeal to one group or another, will wear on voters seeking a leader.

“Voters are starved for authenticity, which is why Governor Christie has been successful in winning in a blue state,” Christie’s chief strategist, Mike DuHaime, told TIME last week. “Voters are looking for leaders who treat them like adults and tell them the truth. They are rejecting politicians who tell everyone what they want to hear and speak only in cautious focus-grouped terms.”

In four policy rollouts in recent months, Christie has deployed his “tell it like it is” message to calling for privatizing college loans and raising the retirement age. “They call it the third rail of American politics,” he said recently in New Hampshire. “They say, ‘don’t touch it.’ So we’re not going to touch it. We’re going to hug it.”

It’s signature Christie, and more such proposals are planned in the coming months.

Already Christie has held eight town halls in New Hampshire this year, and he will hold three more this week, beginning seven hours after his announcement address.

Christie’s speech Tuesday in the high school gymnasium, is staged to mimic the feel of the more than 135 town hall events he conducted in New Jersey, spotlighting the centrality of that storyline to his campaign. His pre-announcement video provides the origin story for those moments, a staple of his stump speech designed to make New Jersey brash palatable to the rest of America.

“I get accused a lot of times of being too blunt and too direct and saying what’s on my mind just a little bit too loudly,” Christie says at one of the Granite State town halls. “I have an Irish father and I had a Sicilian mother … My mom was the one who set the rules and set the tone. No suffering in silence, if you’ve got a problem, tell me.”

Christie would do well to heed his late mother. Sondra Christie’s advice given to the still-unformed future Governor could be what lifts him out of the current slump. If that tough talk cannot, Christie will be left with another truism from his idol, Springsteen: “Time slips away and leaves you with nothing, mister, but boring stories of glory days.” 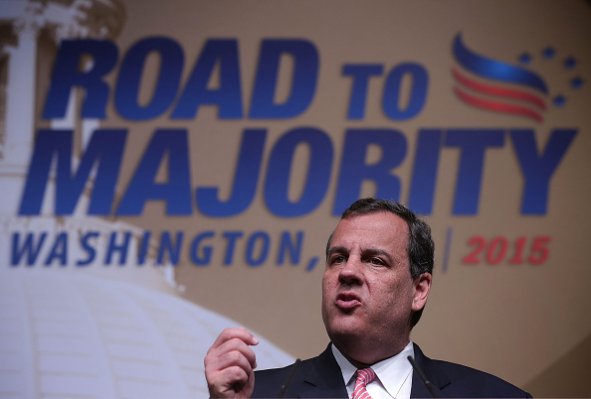