Take It From Me: You Are Not Sure You Don't Want Kids

Getty Images
Ideas
By Karol Markowicz
Karol Markowicz is a writer in New York City. She has worked on GOP campaigns in four states.

There has been an avalanche of writing lately from women who decided, often quite young, that they would never have children. What these women fail to realize is that they might change their minds. It’s not because they’re women, and it’s only partially because they’re young. The fact is, men and women of all ages understand very little about what will make them happy.

In his best-selling book Stumbling on Happiness psychologist Daniel Gilbert argues that we assume that what makes us happy today will make us happy in the future, too. We don’t imagine all of the things that may happen to us that could change our perspective. Present you knows very little definitively about what future you will desire.

I have some experience with being unable to predict what will make me happy. I was a serial monogamist in my 20’s despite knowing with great certainty that I would never be anyone’s wife or mother. I never aww’d at babies or daydreamed about my wedding. I pictured myself at 80, alone and fabulous in sequins and false eyelashes, smoking cigarettes at a hotel bar. Become one of those harried moms who yells at little Billy for smearing peanut butter on the wall? No, thanks. The thought of that kind of commitment kept me up at night. I just wanted to be free. I didn’t want that permanence. Tattoos and babies—neither were for me.

What happened next was entirely unoriginal. At 30, after ending a long-term relationship of 6 years with a really great guy because I couldn’t move forward, I found myself feeling something for my closest male friend of over a decade. Conveniently, he was feeling something for me at the same time. It was different than all of my previous relationships, and I was unprepared for how real it all got, and how quickly.

For one thing, we were already together all the time, so I couldn’t pull any of my tricks to keep him at arm’s-length like I’d done to others. There would be no offering to only see each other a few times a week and encouraging him to go spend time with his own friends. His friends were already my friends, too. And I didn’t want to push him anyway.

A few weeks into our relationship we were talking about marriage and children. For the first time ever, this was a conversation that excited me and didn’t make me nervous or uncomfortable. Less than a year later we were engaged, several months after that we were married, and 10 months after that our first baby was born. Our third child is on the way. The big regret is that we didn’t realize everything sooner: Who knows how many little Billys smearing peanut butter we could have had today.

Will a change of heart happen to everyone who makes the proclamation that I made that children were out of the question? Of course not. The “right guy” may have zero effect on a woman who has decided not to have children. There will be people who don’t want children today who won’t want children tomorrow. Humans have an endless capacity for change, and proclaiming something doesn’t mean it will happen. Before making irreversible decisions, we should try to remember that. 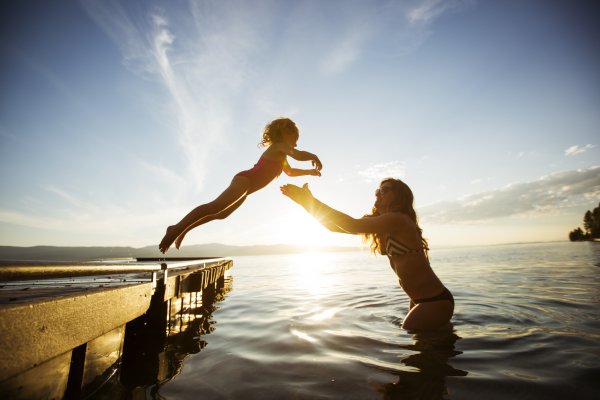 What to Tell Your Kids about Water Safety
Next Up: Editor's Pick