A rally was held in reaction to the Supreme Court legalizing gay marriage in all 50 states by the Forum for Equality, the Human Rights Campaign and the ACLU in Jackson Square on June 26, 2015.
Kathleen Flynn — The Times-Picayune /Landov
By Jacob Koffler

The last state holding out on issuing marriage licenses to same-sex couples after Friday’s historic Supreme Court ruling has relented.

Louisiana officials issued a marriage license to two men, Michael Robinson, 41, and Earl Benjamin, 39, in New Orleans, who are believed to be the first same-sex couple married in Louisiana, ABC News reported. The two have been together for 14 years.

The state’s attorney general, Buddy Caldwell, released a statement on Friday expressing disappointment in the ruling and stating that he “found nothing in today’s decision that makes the Court’s order effective immediately.” Echoing Caldwell’s sentiments, the Louisiana Clerks of Court Association advised parish and city clerks to wait 25 days, the period of time for states to file an appeal of the decision, before issuing licenses.

Jefferson Parish Clerk of Court John Geggenheimer disagreed. Geggenheimer told ABC News that the office’s attorney, after carefully examining the ruling, found that there was no reason for delay. Benjamin and Robinson then received the license in Jefferson Parish and were married in New Orleans—which is in neighboring Orleans Parish—in front of 40 friends and co-workers during lunchtime.

Although licenses were issued in Texas on Friday, the state’s attorney general Ken Paxton released a statement Sunday saying that county clerks and judges can refuse to issue same-sex marriage licenses if it opposes their religious beliefs. However, Paxton acknowledged that “any clerk who wishes to defend their religious objections and who chooses not to issue licenses may well face litigation and/or a fine.”

Louisiana Gov. Bobby Jindal, who is running for the Republican presidential nomination, said Sunday that the state would comply with the decision, which he has argued will erode religious liberty.

Louisiana voters overwhelmingly approved an amendment to the state constitution banning same-sex marriages in 2004. Only 42% of Louisiana residents support same-sex marriage, according to a 2015 poll by Louisiana State University, lagging far behind the national average of 57%. 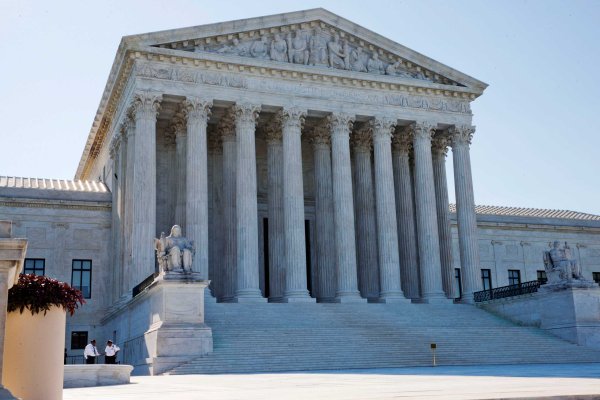