Everything You Should Know About Puerto Rico's Economic Crisis

As Greece grapples with the fallout from its debt crisis, another territory much closer to home — Puerto Rico — has admitted to some major financial woes. The island, which for years has struggled to repay its massive debt, defaulted on Monday for the first time when it failed to repay a $58 million loan, placing the future of the U.S. territory’s economy further in jeopardy.

So what exactly is happening in Puerto Rico?

In late June, Puerto Rico Governor Alejandro García Padilla made a worrisome announcement that the island cannot pay back its $72 billion in public debt, the New York Times reported. Padilla and his staff, according to the Times, said they were seeking to defer debt payments for as long as five years, while also possibly seeking concessions from many of its creditors.

“The debt is not payable,” García Padilla said at the time. “There is no other option. I would love to have an easier option. This is not politics, this is math.”

Puerto Rico is in the midst of a decades-long economic struggle fueled by years of recession and slow economic growth. As a result, its government has taken out massive loans from creditors to cover its costs.

But Puerto Rico has to pay back the money (or figure out a Plan B). In recent years, the commonwealth has raised taxes and slashed pensions in order to pay back its loans, but the island’s “tab,” so to speak, has still spiraled out of control. Many residents have found their businesses collapsing — Puerto Rico’s unemployment rate is double that of mainland America — while others have been leaving the island for better opportunities state-side.

Financial markets across the world have already been rocked by Greece’s debt crisis, and Puerto Rico’s troubles will only add to the current global economic uncertainty.

Puerto Rico paid only $628,000 of a $58 million loan due Monday, claiming its legislature would not release the funds. The move ratchets up the standoff between the island’s government and its creditors, increasing pressure on those who are owed money — mostly big bondholders such as hedge funds — to agree to a significant debt restructuring of the island’s $72 billion debt.

One of the biggest credit agencies, Moody’s, said Monday that it believes this default will be the first of many. “This event is consistent with our belief that Puerto Rico does not have the resources to make its forthcoming debt payments,” Moody’s vice president Emily Raimes said in a statement. “This is the first of what we believe will be broad defaults on commonwealth debt.”

What does this mean for Americans?

If you’re an investor in municipal bond funds, Puerto Rico’s debt might be your problem, too. Municipal bonds — or loans used by local governments to fund public projects — have traditionally been considered safe investments. But some investors are worried about them — several American cities have filed for bankruptcy in recent years, and the Puerto Rico situation could make things worse. According to the Washington Post, as many as three out of four municipal bond mutual funds held Puerto Rican bonds in 2013.

How bad is the situation exactly?

Padilla called the situation a “death spiral.” And he wasn’t exaggerating: Puerto Rico’s debt is four times that of Detroit’s, and the island has more debt per capita than any American state. If the central government runs out of cash, according to the Wall Street Journal, a government shutdown, emergency measures and an unpredictable crisis could follow.

So what’s next for Puerto Rico?

Good question. While Padilla seeks to negotiate with creditors, his administration is also pushing for the right to file for bankruptcy under Chapter 9, which outlines a plan for creditors to get back some of their money. (That’s what happened with U.S. cities like Detroit, Mich., and Stockton, Calif., last year.) But under current law, that right is afforded only to U.S. cities, not to states or territories including Puerto Rico.

Read next: Everything to Know About Greece’s Economic Crisis 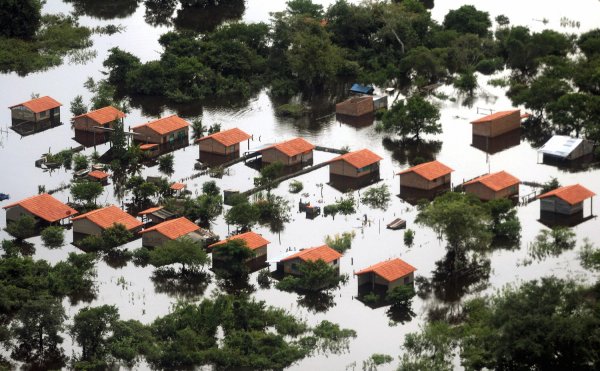 El Nino Could Cause Serious Trouble Across Asia
Next Up: Editor's Pick