Feds Investigate String of Fires at Black Churches in South

Elisha Walker, 9, and his mother Bonita Walker look at the charred remains of the back left wing of Briar Creek Road Baptist Church in Charlotte, N.C. on June 24, 2015.
Davie Hinshaw—AP
By Maya Rhodan

A string of fires at churches with predominantly black congregations is being examined by federal investigators in the wake of the recent massacre at Emanuel AME Church in South Carolina.

Six churches have burned in the past week, according to the Southern Poverty Law Center, and three of the fires are being investigated as arson. Given the history of anti-black violence centering around churches, particularly in the south, the SPLC says the incidents may not be a coincidence.

According to the Washington Post, the FBI and the Bureau of Alcohol, Tobacco, Firearms, and Explosives are involved in the investigation into the incidents — though the FBI says it’s too soon to tell if they’re at all connected.

The College Hill Seventh Day Adventist Church in Knoxville, Tenn. was set ablaze on June 22, along with a church van outside of the building. Investigators suspect arson, though WATE reports it is not being investigated as a hate crime.

TIME reported last week that a fire at a black Baptist church in Charlotte, N.C. is being investigated as arson. The fire at Briar Creek Baptist church was reportedly so big it took around 75 firefighters about an hour to get the flames under control.

In Macon, Ga., investigators believe the God’s Power Church of Christ was also intentionally set ablaze and have been investigating a fire there as an arson.

Three other churches in Florida, South Carolina, and Tennessee were set on fire last week, too, though two were believed to be caused by either lightning or electric wires, the Post reports. A cause for one of the fires has not yet been determined.

Scrutiny of the series of fires comes after the killing of nine people at a Bible study meeting at Emanuel AME Church in Charleston, S.C. The suspected killer in that case Dylann Roof, 21, was motivated by racial hatred.

President Obama noted Friday the black church has long been the “center of African-American life” at the funeral for Rev. Clementa Pinckney, who was killed by Roof. Violence against black churches dates back to before the Civil Rights movement, though there was a spate of incidents in the 1990s. 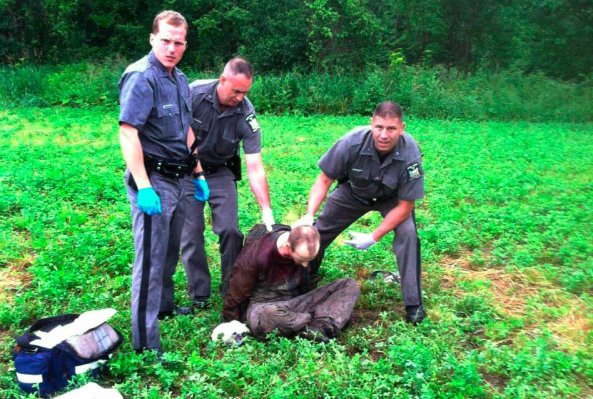 State Trooper Who Shot Escaped Inmate Hailed as 'Hero'
Next Up: Editor's Pick