It was easy to gauge the rising panic in Athens this weekend by the length of the lines at the ATMs. On Saturday, when Greeks learned that they would have to vote on the terms of their country’s bailout program in a snap referendum on July 5, clusters of people began to gather at the machines that still had cash to give. By Sunday afternoon these lines were sometimes stretching entire blocks as word spread of the government’s shocking announcement: the banks would not be allowed to open in the morning, and they would start limiting how much money their clients could withdraw.

The resulting anxiety, which would seem to herald an imminent climax in the five-year-old saga of Greece’s depression, will now form the atmosphere for next weekend’s referendum. The choice voters face is stark: They can either vote Yes to more tax hikes and pension cuts as a condition of keeping financial aid from Europe flowing, or they can vote No and reject the deal from Greece’s creditors, potentially forcing the country to default on its debts and pull out of Europe’s currency union.

For many in Athens, however, the decision came down to a simpler and more depressing question: What do we really have left to lose? Tionysis Matheakakis, who plans to vote No, says he has already hit rock bottom. When the global financial crisis first pushed Greece to the edge of bankruptcy five years ago, he lost his job as a milk truck driver at the age of 48, leaving him too old, he says, to find another job since then. Though he has no source of income, he still has to pay higher property taxes on his home, among other new levies that Greece has imposed as part of its push to raise revenue and pay back debts.

Now, the new cuts to pensions that Greece’s creditors are demanding threaten to eat away at the only steady income he sees, nine years from now, when he can legally retire. “They are squeezing us dry,” he says on the city’s Syntagma Square, where lines formed at cash machines over the weekend as the government announced the banks would not open Monday. “It’s time to break the chains,” he says.

That is the option Greek Prime Minister Alexis Tsipras offered his demoralized electorate in the early hours of Saturday morning. In a televised address, he called for a nationwide referendum to decide whether or not Greece should accept the latest bailout terms from its so-called troika of creditors – the International Monetary Fund, the European Commission and the European Central Bank.

Even though the Greek economy has shrunk by a quarter in the past five years, these institutions have refused Tsipras’ demands for a reduction in debt and an easing of the Greek austerity program. Instead they are demanding further tax hikes and pension cuts as a condition of continued assistance. After five months of fraught talks, their negotiations broke down late last week, prompting Tsipras to ask his electorate how the government should proceed.

“The day of truth is coming for the creditors, the time when they will see that Greece will not surrender,” Tsipras, a self-professed radical leftist who was elected in January, told an emergency session of parliament on Saturday afternoon. “I am certain that the Greek people will rise to the historical circumstances and issue a resounding ‘No’ to the ultimatum.” The chamber, which is dominated by a coalition bent against austerity, then approved his bid to hold the referendum.

But according to early polls, Greek voters seem likely to reject the pleas of their Prime Minister. In a survey commissioned by the newspaper Proto Thema and released on Sunday, 57% of respondents said they would accept the troika’s bailout terms with a Yes vote, potentially forcing the anti-austerity government to resign and call new elections.

Nick Kontodimos, an accountant in Athens, is among the voters ready to accept the troika’s deal. The only way Greece will get its finances in order, he says, is under pressure from its European creditors, which have forced Athens to impose fiscal discipline and curb government waste for the first time in generations. “These foreign guys put the gun to our head and told us to do the most obvious things,” he says. “It’s ridiculous, but it seems like we needed this gun to our head.”

Removing it could result in disaster for Greece, especially if it abandons the euro and goes back to its previous currency, the drachma. On the upside, that would allow the government to print money and boost spending in order to stimulate growth. But inflation would then be sure to spike as the value of the drachma plummets against the euro and the dollar, making it more and more difficult for the government to afford basic imports such as oil and machinery.

Greek banks would also come under tremendous pressure. If their clients suddenly start receiving their paychecks in drachmas, many of them would be unable to repay the loans they took out in euros, forcing them to default. Already the risks of Greek banks collapsing has prompted many to pull out their savings and stash them at home — or attempt to at least, as many did over the weekend.

“We have no choice. We have to feed ourselves somehow,” said 38-year-old Antonia, who lost her job in the medical supplies business three years ago and has since been unemployed. On Sunday afternoon she was among those thronging an ATM on Syntagma Square. When asked how she would vote in the referendum, her anger at the creditors spilled out. “They’re killing us,” she seethed. “We have to break free of the constraints they have surrounded us with.”

Never mind that those constraints may the only things keeping the Greek economy afloat. 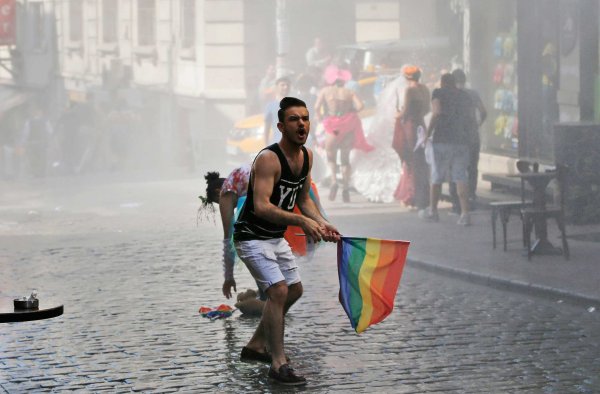 Turkish Pride Parade Broken Up By Police
Next Up: Editor's Pick